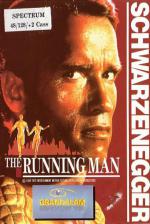 Blimey! It's another game with Arnie (Schwarzenegger) in it! You can't hold the muscle-bound chump down, can you (unless you anaesthetise him and attach him to five or six anvils first, that is). Anyway, it's quite a good thing that he's back (back back), 'cos this is, in fact, a rather spanky game.

The Running Man! There's a good chance you've seen the film (or video, which has got an advert for the game spliced on at the beginning). Unfortunately I haven't, so hang on a mo while I get Matt and Jackie to tell me the plot. Tum te tum. Really? Does he? Why did they do that? So he isn't really a baddie after all then. Oh good. Thanks chums.

Hello? Still there? Right, plot of the film (and therefore game) time.

Our 'Arn' plays Ben Richards, a futuristic cop/helicopter pilot. At the beginning of the film he disobeys orders to shoot down a bunch of innocent civilians, which unfortunately for him is turned into a 'crime against the state' rap. "It's a crime against the state, they ain't gonna ne-go-tiate. our Arnie's goin' t' do some time he's..." (Not that kind of rap. Ed). Normally Arnie would be flung into jail for this misdemeanour - but not so in this even more barbaric age: there's worse punishment in store - being forced to compete in a TV game show called The Running Man.

Making the Japanese show Endurance seem like an episode of That's My Dog, the contestants in The Running Man are really up against it. The first prize is death and so is the last - there's no getting away from it. No-one gets to take home a Blankety Blank cheque book and pen. In fact no-one gets to go home at all! Jeepers.

The title sequence of the computer game is jolly super, mimicking that of the film, with a silhouette of Arnie running over the logo and a bit of synthesised speech followed by a sequence of Arnie travelling down a tunnel into The Running Man arena. This is where the TV cameras are rolling to record all the action and it's where you take control.

You've got to survive against The Stalkers, who are psychotic gladiatory type brutes sent to execute you (or Arn, the Runner) in a vile manner - and there are five horizontally left/right monochrome scrolling levels for you to get through, so let's make a start.

Run to the right - the sooner you reach the end of the level the better. An on screen bar indicates your stamina level, which to begin with (surprise surprise) is topped up to overflowing. Yikes! There's a dog after me - quick, outrun him outrun him. Oh dear, he seems to be able to trot at a pace far more brisk than me, so I'm going to have to stand and fight. Here boy. Biff! Ah, that kick to its head won't have won me any friends at the RSPCA, but at least it's sent the beast packing - oh dear, he must have got a bite in, 'cos my stamina levels taken a bit of a hammering. Still, if I stand stationary for a while it'll top itself back up again. That's better. Blimey there's another dog - quick, up onto that bench thing, that'll thwart it. Oh no, it's hanging around - there's nothing for it. This is from me, son of Lassie. Biff. Off he goes.

Righto, now for another bit of brisk running: pant pant pant pant, oh, there's some holes in the ground - alley oop! up and over, alley oop! and again. No problem. Hey, what's that over there? Looks like a brick... yes it is. I think it might be wise to pick it up. Hmmmm, handy things bricks, what with their inherent solidness and 'bung-ability' - woe betide any Stalker that dares challenge me now. Yikes, there's one approaching - quick, bung the brick! Uhh? He hasn't fallen down. I'd better steam in and kick and punch the blighter - hey, what's that in the distance? Looks like an iron bar - very 'pick-up-and-usable', I'll be bound. Crunch. Yikes, the Stalker's got me with a good one, my stamina level's plummeted. If I can just do a flying kick to his head I might be able to reach the bar (What do you want a drink for at a time like this? Ed) and pick it up. Whack, oh dear, the Stalker seems to have killed me.

The Running Man is an ideal scenario for a computer game, and if well implemented would be a corker. Has it been well implemented? Indeed it has by cracky - think of an updated 1989 scrolling Saboteur with 128K sound and you won't be far wrong. There are all the fighting moves you'd expect - kick, flying kick, duck, throw weapon, and one click to the side on your joystick makes Arnie trot, while two in quick succession make him run - which you do quite a lot, actually. At the end of every level you gel sproinged onto a logic problem screen which has to be completed within a time limit. Its a sort of 2-D 'switch different pairs of icons about until the pattern on the left is the same as the pattern on the right' type of thingy. Complete it and your energy gets bunged back up to full again, fail to complete it and erm, it doesn't.

Movie licence that makes a perfect computer game. Frenetic and visually great kick and shoot-'em-up with the occasional need for quick logic under pressure. Sterling stuff!

Frenetic and visually great kick and shoot-'em-up with the occasional need for quick logic under pressure. Sterling stuff!