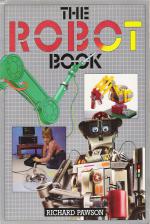 THE POPULAR image of the robot, as seen on television and portrayed in books, has changed only slightly in the past 20 years.

Much fiction has been written about robots which talk, perform complicated actions and even rule the world, but few non-fiction books have found their way onto the market. The Robot Book, by Richard Pawson, puts that oversight right.

Pawson has divided the book into four parts covering the history of robots, robots in action, how they work, and a section on how to build robotic devices. Each section is lavishly illustrated.

The section explaining how robots work is the most interesting. It starts with a brief look at the main parts of an automaton, such as its synthetic senses, movable parts and motors. Pawson then goes on to show the types of robot available. Those include industrial and laboratory devices, domestic 'helpers' and toys.

Some of the uses to which robots are put seem dangerous. The book contains a picture of a sheep being sheared by a demonic looking machine. One slip and...

But, according to the author, accidents rarely happen. He also demonstrates that robots have a very fine touch and can pick up an egg without dropping or cracking it.

The practical section of The Robot Book has yellow tinted pages so that anyone following a project can turn to it quickly. Projects include a toy android, a Lego robot arm and even a card-dealing robot. It is all good fun and the projects are easy to build.

If you like the technical side of computers and robots then The Robot Book will prove entertaining reading. I cannot even complain about the price which is surprisingly low for a publication of such quality.

If you like the technical side of computers and robots then The Robot Book will prove entertaining reading.
Logout