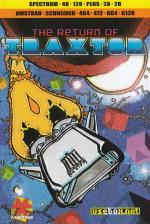 Another new puzzle game to play on the Spectrum is The Return Of Traxtor, in which you must stop - at all costs! - the columns of coloured blocks that begin at the top of the screen from reaching the bottom of it. You can destroy blocks from any column if you align three blocks of the same colour (either vertically or horizontally), and you can grab the blocks themselves off the top of any column.

The skill of the game is in using the "stack" which is a "First In Last Out stack", familiar to software developers everywhere. You can, for example, pull a blue block from column 1, and a red block from column 2 but your next placement move would then have to affect the red block on the top of your stack. Your stack has space for three blocks so you should find that you quickly develop the necessary skills to grab blocks, temporarily place them on other columns to place/destroy others, and/or grab them back again if need be. The speed at which the entirety of the wall of blocks descends increases steadily until a block inevitably crosses a line at the bottom of the screen and signals game over.

Although it's not going to set the world on fire, Traxtor does have a nice feel to it, nice sound effects and a bouncy tune on the title page. The game itself is pretty addictive too - the only real problem being that, occasionally, it doesn't seem as responsive as it should be.

Available free from sites.google.com/site/speccy21/home. (Search for "The Return Of Traxtor".)

Pretty addictive... The only real problem is that, occasionally, it doesn't seem as responsive as it should be.