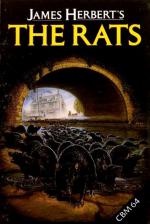 The heartbeat quickens and your breathing suddenly seems febrile and irregular. You're alone in the house and the only illumination is the eerie blue-green glow from your monitor and the sanguineous emanation from the power indicator of your C64. Was that a floorboard squeaking just then, or was it something far more sinister? Dare you look around to check? If you do, you risk having to reload your game from scratch...

There are several examples on the market of computer games based on famous books. The Electronic Pencil Company's The Fourth Protocol is perhaps one of the best examples of current successes in this field. Hodder and Stoughton's The Rats, based on James Herbert's chilling novel, is the latest offering in this area. It is an unusual mixture of semi-graphics adventuring and real time strategy.

The title sequence is one of the most original and atmospheric, ever designed for a computer game. A prologue is written out in bold white letters across a black screen to set the scene. What follows is a sound and animation sequence in which a pool of torchlight is seen wandering around in the blackness, before red eyes appear in the dark. A heartbeat effect in the background becomes faster. Suddenly, a superbly drawn rat pounces into view! Only then are you presented with the main, blood-spattered loading screen, with eerie accompanying theme music.

The Rats is, to all intents and purposes, two games in one. The Strategy game involves stopping the spread of the rodent plague from the city of London and killing it off. The opening screen is a simplified map of the city with an option window at the bottom. The main choices presented are 'Report', 'Forces', and 'Research'. A cursor flashes on various parts of the map to indicate rat activity. You may then ask for information on the relevant area, deploy forces there, or ignore the cursor and work on research instead. If you ask for a report, you are prompted to define from where you wish to access information by locating your own cursor on the map and pressing Return (or hitting the fire button). On doing this, a smaller window opens up on the screen and presents some basic information such as 'Man in street sees monster rats'. You may then eliminate the window and move on.

Reports from various groups you may have deployed in the field can also be obtained by using the same process, including three icons on the screen indicating the R&D centre, GHQ and Harris' flat (Harris is one of the major characters from the adventure section). It is fairly important to follow the reports so that you become aware of the nature of the attacks, but to concentrate too much time on them would leave you no time to allocate forces. The deployment of the fire service, police and professional rat-killers is essential to your success, because if the rats leave London then the game is lost. The three types of forces have varying abilities and weapons. To start with, weapons are fairly conventional - dogs, gas and high pressure water hoses. You must equip each unit (fortunately you need not try to figure out how many of what to give to whom; the limitations of each force are worked out for you), and then designate the area requiring their attention. Later you may ask for that unit's progress report.

Your forces are very limited, and trying to stop the rats with them is pretty well, impossible. What you need to do is delay them for as long as you can, and eventually the army is brought in (by a reluctant government) to give you a second lease of life. This does not happen for some time however, and there's plenty to keep you busy beforehand.

Spending time on research is another important process. You have only so many resources and you must decide how to best use them. The areas for research are 'origin', 'nature', 'offence' and 'defence'. Spending points on offence and defence will help develop more advanced weaponry with which to combat the menace. However, finding out about their source is fundamentally important to the adventure game.

The Adventure section, like the strategic one, is in real time. You are shifted to the adventure section at random intervals throughout play. Each entry into this section is precluded by an alarm sound from the computer. This part of the game is more like a series of mini-adventures, involving various minor characters' encounters with the rats. It does not matter if you lose some of the minor characters (easily enough done at the beginning), but if a major character (such as Harris) bites the dust, then you've had it!

The adventure display contains a major window on the right of the screen, showing all the text in slow-scrolling format, which helps emphasise the real time aspect of the game. At the bottom of the screen is a small window with three main command options and when accessed, further sub-options are presented in the left-hand window. A heartbeat sound accompanies the action and as the situation becomes more tense, the heartbeat speeds up. Because the game uses options instead of clear text input, conversations with the computer never become ambiguous, so play is resultingly very fast and efficient. However, on occasions an option appears that was not there before, implying its impending use. Sometimes this does not help but more often than not it may be treated as an integral hint sheet! If you lose the encounter with the rats, the page seems to tear open to reveal a nasty-looking rat, and there is the sound of a scream... AAARRRGH!

This game is really good fun to play and provides excellent, if somewhat gory, entertainment. The only gripe is that you have to make a data tape and keep on loading from that, or load in the whole program every time your game finishes (which becomes a real pain because it's a rather slow loader). The graphics and sound effects are very atmospheric and really add to the grimness of the situation. The game itself is incredibly easy to use and will take some time to solve, even for those who have read the book. I thoroughly enjoyed playing it, and there's even a free copy of The Rats book for those who haven't read it (and that makes pretty good reading).

The Rats, unfortunately, is a mixture of innovative successes and miserable shortcomings. These don't really exist in the game, but rather around it. Once loaded, it is really necessary to save the game as soon as possible because, due to the fact the program possesses massive data files, there is NO restart facility. You either need a saved game or you will have to load the entire thing all over! There is no menu of options to help clear up matters, and the instruction booklet is misleading and practically unintelligible. These are major faults, considering the size of the game. On any other game they would be totally crippling. However, because of the input format, even badly explained sections can be picked up fairly easily.

The game's percentage-based scoring system is silly. When a good, reasonably successful game had been played, the score was 35%. Yet on a new game where the computer was left to win without any player input, the score was 25%. Also, when in the fast-paced adventure section, minor system crashes seem to occur in the form of text character decay and randomly appearing, multi-coloured blocks, though these don't appear to effect play.

So much for the drawbacks, on the credit side the narrative quality of the text is superlative and gory, in true Herbert style. Definitely not for the squeamish, this! The two games integrate perfectly, with good strategy needed to keep going and good adventuring necessary to finally beat the oversized rodents. With automatic returns to the strategy game after completion of the 'mini-adventures', this smooth-flowing play must be credited for the faultless piece of design it is. Some of the touches are excellent - like when you lose and the page is ripped open by sharp teeth... the use of a simple scream sound is very effective. This is definitely one of the highlights of the game.

It's a pity Hodder & Stoughton haven't ironed out the faults for the game's release, but I was told that this was the way the game would be sold. As it is, one can only wonder whether indeed it does deserve success in its shoddily finished format.

Presentation 73%
Excellent preliminaries let down by some sloppy peripherals.

Graphics 76%
Generally highly effective, but weak in some areas.

Sound 72%
Patchy, but when it happens it's very good.

Hookability 78%
Relatively easy to get into despite uninformative instructions.

Lastability 80%
The many situations require plenty of thought.

Value For Money 84%
Quite a lot of 'two games' for a good price.

Overall 79%
An exciting blend of arcade/strategy/adventure that would benefit from some tidying up.

Relatively easy to get into despite uninformative instructions... The many situations require plenty of thought.