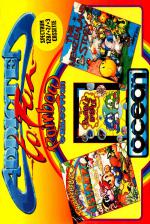 In the checkered history of computer gaming, releases that promise "fabulous new graphics and game play, never previously seen before" come and go at an awesome rate. Few live up to their hype and many games flop due to saturated publicity, but the trilogy of Bubble Bobble, Rainbow Islands and The New Zealand Story have all, individually, been carpeted with praise by the truck load and still (4 years after the first release) deliver.

Bubble Bobble features two battling brontosauruses, Bub and Bob, who stagger their way through a platform-and monster-infested world, destroying the inhabiting beasts by blowing bubbles at them. Once touched, the monsters can turn into fruit which you can collect for your bonuses Released many years ago, the graphics are very basic and just serve to hold the game together, but the game play and bubble blowing easily make up for the absence of detail.

Realising that this was a pretty good idea for a game Ocean decided to convert the semi-related sequel, Rainbow Islands. Using the same names, but different characters, you are a cute, big cheeked young lad with a talent for throwing rainbows. Using the same format as its predecessor, you must jump your way to the top of the screen by using the platforms or throwing a rainbow and mounting that. If you're too slow you'll be drowned by the rising water. There are seven islands for you to hop around, each infested with a different army of creatures (Insects, Toys, and Robots etc). The game makes use of loads of colour and the sound effects are coupled with a merry tune with which to play along. Easily the best game of the collection, you just can not fault it in any respect. With loads of bonuses, fruit, gems and add-ons to collect, I've had a copy for years and still dust off the box for a few hours of island hopping. It's pure gaming excellence!

To complete the adventure New Zealand Story takes you through another transformation. This time the action takes place on one island, New Zealand, and you take the role of Tiki the Kiwi. You have been kidnapped by the monstrous Walrus, along with all your relatives who have been hidden around the island to be scoffed by the big bully at a later date. Armed only with a bow and arrows you must rescue your kin and escape the Walrus's buddies. Not diverting from the style of the other games much, Tiki can commandeer balloons from other creatures in order to fly around. Spitting water from your mouth kills baddies and also replenishes oxygen levels whilst under water. Just rescue the Kiwi from each level and defeat the guardians. Whilst not as pretty as Rainbow Islands the game has large cute sprites and varied monsters. It can prove to be a bit frustrating at times as Tiki is not as nimble as he could be, but he can fire an arrow with the speed of a Kalashnikov!

Rainbow Islands is the star of the show, but all the games are enjoyable and varied enough to warrant individual attention, although Bubble Bobble is looking very dated. If you have Rainbow Islands and are short of dosh I'd stick to that, but everyone else should snap up this fab collection. Many late nights and anorexic kids are predicted!

Although the games are good (Rainbow Islands, excellent) as a collection they are in danger of becoming slightly tedious by being so similar to one another. Never the less a welcome release.

Although the games are good (Rainbow Islands, excellent) as a collection they are in danger of becoming slightly tedious by being so similar to one another. Nevertheless, a welcome release.
Logout