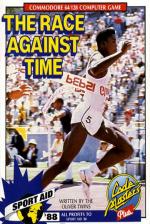 You'd think something as energetic as leading the global charity fun run, Sport Aid '88, would leave you feeling a bit... well... knackered to say the least. But no, Omar Khalifa, the legendary Sudanese athlete is preparing to run again. Well, he's not really, he's just the name that's given to a block of white pixels in a computer game, but you know what I mean, don't you?

Anyway, Omar's personal race starts out in the El Mowheli relief camp in Sudan. He's only got a certain amount of time to raise a flag and light a flame in each of six (six?) continents. Now Omar's pretty fit but he can't walk on water - so to get from place to place, he uses a plane (well OK, an icon on a global map).

As usual the population of the world has left a lot of rubbish lying about. Bit of luck that - picking up an object in one place should prove helpful for progress later on.

The Race Against Time was produced expressly for Sport Aid and all profits from its sales will go to support the charity's campaign to help children in need all over the world. OK?

Phew! It was beginning to look as if Codemasters weren't going to get the C64 version of their Sport Aid '88 game out before the end of the year. Wouldn't have been very topical, that - Sport Aid '88 in '89.

Which brings me to a strange and wondrous mystery. Why have they spent so long developing this when the Spectrum version, which was released early in the summer, looks exactly the same?!

Well, not exactly the same - the control method is a lot messier and the screens flip so slowly that you've got time to get out of the way of a herd of rampaging rhinos in between. Forget about this really dud game - contribute to the cause instead.

I really enjoyed playing this when it came out for the Spectrum - loads of puzzles, attractive graphics and, to top it all, a really good cause. Er... couldn't really say the same about the C64 version though.

In a C64 version 'cos you'd find about as many differences between the two formats as you would between two absolutely identical turkeys with two identical chef's hats on each leg.

Not only that - Peter Gabriel's Games Without Frontiers soundtrack is even less musical than Maff's rendition of White Christmas after half an ale down the pub - and it doesn't even play throughout the game.

If you're keen to buy this because of Sport Aid, give five quid away instead. You won't be missing out.

Presentation 45%
Apart from a naff title screen, nothing outstanding.

Graphics 28%
Great by the Spectrum's standards but abysmal for the C64.

Hookability 49%
Well, you might as well see what this malarkey's all about.

Lastability 31%
The screen flips too slowly and the control are too awkward to muster even average appeal.

Overall 30%
The Spectrum Race transferred trainer, shorts and singlet to the C64.

It's the Spectrum game on the C64. Yes, I suppose it may well be great by the Spectrum's standards... but the graphics looks pretty abysmal on the C64.