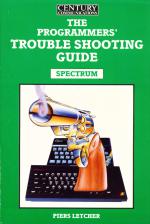 IT SHOULD BE the answer to all Spectrum programmers' dreams, but The Programmers' Trouble Shooting Guide, by Piers Letcher, is no more than a witch's brew of hackneyed programming ideas and solutions presented in a new format. It is for those people who are not merely beginners, but who have not even bought their computers.

The introduction to the book contains a table listing the types of problems you may encounter with your computer, together with the chapters which cover those instances. For example, if you are unable to run a program, it may be because of typing errors, corrupted memory or locked-in machine code. The answers to those weighty posers are found in chapters two, nine and eleven. They could just as easily be found in the chapters on editing, and memory configuration in the Spectrum manual.

The list will probably get you thinking that at last you have everything you need to know in one book but, unless you are an absolute beginner you will have probably come across such in- formation before.

The first six chapters do little to expand on the information given in the Spectrum manual, but the sections on animation, sound and memory are of some use if you have not bought any other books already on the market. There is also a chapter on machine code and appendices, most of which look as if they have been taken from the Spectrum manual.

Letcher's book suffers from a disease found in many compendiums. He has only been able to scratch the surface of topics which require books and not chapters to explain adequately.

You would, therefore, be better off looking elsewhere for an indepth treatment of graphics and machine code programming. If, however, you are a beginner the book may provide an easy launch pad to better computing.

If you are a beginner, the book may provide an easy launch pad to better computing.
Logout