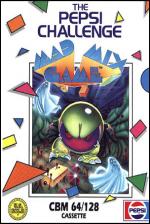 Who is Mix? Why is he mad? Who gives a Canadian monk seal? Not us, that's for sure! Well, whoever he is, he's round and runs around mazes eating dots and avoiding ghosts which are trying to kill him (no wonder he's mad!).

Sometimes he finds things that are useful, like power dots which turn him red and allow him to kill monsters, and magic tiles which turn him into a big fat editor. No, no! I mean hippo (phew). Then he can walk down one-way paths the wrong way and splat ghosts. Gates can only be passed one way in any state and gun lanes allow Mad Mix to blast enemies off the grid.

I'm all for a bit of nostalgia every now and then, but it's only worth getting nostalgic about something that captures the right atmosphere.

Now I don't mind Pac-Man at all, in fact I used to play it a lot in the arcades, but Mad Mix is a poor rehash of the Pac-Man theme and doesn't capture any of the atmosphere of the original game.

It tries to add excitement with a few new features, but it's still not there. The graphics are small and blocky, the sound is weak and the gameplay is boring. What more can I say?

Ever since Taito rejuvenated Breakout and turned in into Arkanoid, game designers have been trying all sorts of things to jazz up old games. Topo Soft have tried to do the same in Mad Mix. I liked Pac-man when I first played it ages ago - and I still think that it's better game than Mad Mix.

It's not *too* bad I supposed, but it's not exactly state of the art either. The maze graphics are drab and boringly coloured, the sprites are flat and characterless and the sound is dire.

Try it out for yourself on the cover-mounted cassette.

Presentation 31%
Frustrating delays and very little to create any atmosphere.

Lastability 41%
...but you'll stop playing a couple of levels later.

Overall 48%
A poor attempt at rejuvenating a much-loved idea.

A poor attempt at rejuvenating a much-loved idea.