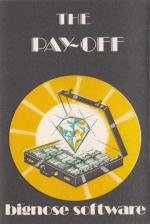 This text only adventure is set in the back streets of downtown New Jersey - your object to raise money by any means to pay-off the sinister Luigi. According to the press release this game was originally released on disc only by Atari for a promotion, but has now been licensed to Bignose for release on a range of popular micros. Well, the game is quite fun to a point, but by current adventure game standards can hardly be said to provide good value for money.

The main problem is that this game, written in BASIC with no text compression, is very small. There are only around 40 locations whose descriptions, like the accompanying messages are brief to the point of ungrammaticality. The austere text makes very little use of the potential for atmospheric and humorous comment which is inherent in the ganglang setting. I also disliked the screen display which used no colour and upper case text throughout. The two word parser was also handled badly, with the player being required to enter such horrible phrases as 'GO DOOR'.

With the help of a clue sheet, which the paying customer can send off for, and a special reviewers' solution sheet I played through the game in an evening. Without both, I would probably never have solved it since the problem solving towards the end is highly obscure. Making the game 'last' in this way hardly provides value for money for the player who has seen only a few briefly described locations before getting stuck.

A small but amusing game can be successful on a promotion, but a different proposition when sold for real money. Even at the tape price of £5.95 the game is overpriced and the mark up on the disc version is ridiculous. The game is not bad, but it provides so little for your money that I would definitely recommend you to give it a miss.

The game is not bad but it provides so little for your money that I would definitely recommend you give it a miss.