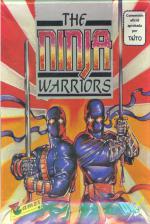 It's 1993 and sinister dictator Bangler is in control of the city with even the armed forces and the criminal underworld in his power. The citizenry, lead by a guy called Marc (my sort of chap), build two bionic Ninjas to dispose of Bangler once and for all. Dubbed The Ninja Warriors the robotic pals are sent to dish out some rip, mangle and maim fun.

Alone, or with a buddy, you control one of the immortal murder machines on their six level horizontally scrolling romp through the devastated remains of a once proud city. Armed with a pair of knives and a limited supply of throwing stars you must Meat soldiers armed with knives, guns and grenade launchers, hunchbacked ground spacers, huge tanks and Ninja swordladies, to name but s few. Not being human you metal hide can take a lot more punishment than mere flesh and bone would, but heave poundings will get you in :he end.

Levels conclude with a big fatty, and a handy tip is to save your shuriken for these guys, because they are tough. Finally Bangler will be faced, and despite pleading for his miserable life cut down.

The game gets off to a good start with a creditable rendition of the arcade title tune. The sprites in The Ninja Warriors are all very nicely detailed, but the game is incredibly tough. Soldiers swarm around the immortal murder machines and end the first few games very quickly. Many fans of the arcade machine will no doubt be put off by the high difficulty level: definitely one for VERY tough joystick bashers only.

'Ninja Warriors is a brand new concept in computer gaming, an idea that has never been used before in the history of computers. Well, that was a lie, it is (as you might have guessed) a ninja beat 'em up game. I played the arcade original at the PC Show and, as beat 'em ups go, it was quite good. The Spectrum version is not a bad conversion but is a little on the slow side. The graphics keep up the quality of the coin-op, but the colour has been washed out of them to produce a nice shade of black on white!. Animation is good though, and smooth. For all you sound freaks there are a few digitised words at the beginning, a tune which I find very annoying and the odd effect while playing. Ninja Warriors is a good arcade conversion, but then the original did not really have anything new to offer the punters.'

Ninja Warriors is a good arcade conversion, but then the original did not really have anything new to offer the punters.