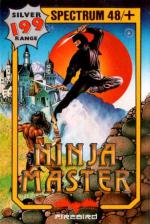 I f you've ever wondered how Ninjas become Ninjas then playing this game might give you the answer you've been searching for. Apparently it's all sorted out in a kind of Ninja Olympic Games. After many months of preparation, learning various skills from your Hanshi, it is time to compete in the great contest that decides whether you deserve to hold the title Ninja Master after all.

The game contains four levels, and you are called upon to demonstrate a different oriental skill in each one. The first section is set in front of snow capped mountains. Deadly pointed arrows are shot at you from random directions and they have to be deflected away from your body. Four movements are involved: kicks and punches to both the left and right. Intercepting arrows wins points and a score of over 1500 is needed to progress on to the next level. When an arrow lands on the Ninja's body he utters a blood-curdling yell, but a successful deflection is greeted with a war cry.

The second part of the contest takes place in indoor arena where a sturdy piece of wood has to be karate chopped in two. You have twenty seconds to build up your strength by pounding away at the keyboard, trying to move the status arrow as far along the strength chart as possible. After twenty seconds the Ninja automatically lets fly with his fist and tries to cut the block in two. Three attempts are allowed on this stage, and at least one bit of wood has to be broken to qualify for the third round. A successful performance is rewarded by enthusiastic applause from the Japanese audience.

The third level of the tournament has a slightly cosmopolitan feel to it the action takes place on the banks of the Nile, in the shadow of the Great Pyramids. Equipped with a pointy stick, the Ninja has to fend off Shuriken Stars. The stars are fired randomly and at great speed, and your Ninja must stop them from embedding themselves in his body by blocking them with his stick. Again, three attempts are offered and a qualifying score of 1200 pints is needed before you can continue.

Ninjadom is just around the corner if you get to the last section. Canisters thrown from the right of the screen have to be shot down with a blowpipe. The backdrop is back to a more traditional Japanese style with a huge red moon hanging in the night sky and snow lying on the ground. When the required score has been achieved you graduate to a yellow belt. From here onwards the game cycles round again, except the qualifying scores are much higher.

'Gosh, an original Idea for a sports simulation. It's been a while since a joystick waggling game ventured onto the humble Spectrum; I must say that it is quite good as well. The graphics are thirty good although not outstanding: your character is a little jerky, but he doesn't move into any unrealistic positions. The sound isn't excellent but the screams are good! As for playa-'linty, well it's quite good fun for your first few goes but its appeal diminishes a little after you've completed your first set of four screens.'

'Not exactly a new idea, but at the budget price it's a new venture, and I'm sure there'll be a few takers. The graphics are very similar to that of Sai Combat and the whole game is more of a bash and smash Hyper Sports. The sound is very realistic and it includes a good use of 'eegh! ' and 'aghh! ' speech effects. I wouldn't say there is anything terribly original in it, but I found the game very compelling to play. Firebird have released it at the right price, and it would give you good value for money. But if you've got a fight game then forget it'

'Not another label relaunch Firebird! Oh well, though it hasn't got amazing graphics, Ninja Master itself is quite fun. The sound, if the frenzied cries of a pained Ninja can be defined as sound, is quite realistic as far as the limitations of the Spectrum will allow. I didn't play it for all that long, but for £1.99, it should provide a few hours entertainment, I suppose. I wouldn't buy it, but then there are those who like this sort of thing, and it might well appeal to them.'

Firebird have released this at the right price... It'll give you good value for money.