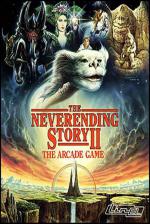 Anyone seen the film? Well, Linel's conversion follows the tortuous plot with the hero Bastian chasing the evil sorceress Xayide through seven levels.

On loading, you're greeted with an opening book telling you about the plight of Fantasia. Accompanied by Limahl's haunting title tune, this is a jolly nice intro, However, you may get a little sick of it as it appears every time you die.

The first level features the Silvercity. Bastian (a tiny slip of a lad) walks through the market place where lobster-like creatures (Stu thought they were moon-laced men! Alan said they reminded him of bits of orange peel!) suddenly appear out of cracks in the ground and try to grab him. They can be destroyed, when static, by shoving them into the sea or off platforms.

The indicator at the bottom of the screen shows the time left to complete the mission. Lose a life here and a large portion of Fantasia crumbles away. Escape the giant creatures and climb the rope waiting for you on the other side of the city. Sounds easy, but first you've got to find the blinkin' thing and all the streets look incredibly similar, so mapping is essential.

Level 2 is an extreme change of pace: no platforms here, just fast 3D racing through a blocky canyon. Riding Falkor the friendly dragon, Bastian chases the fire-breathing dragon Smerg, trying to knock him into the canyon walls. Being struck by lightning, and touching the walls or floor, drains your energy - shown below along with Smerg's.

The third level is split into two parts, a general view of Castle Horok and a close-up view. With the help of some magic, Bastian starts to scale the walls, but is obstructed by rockfalls and fire.

Inside the tower, on Level Four, Bastian is attacked by giants, so he wishes for a way can to defend himself (an Uzi would have been my choice!). Wait on each platform until five giants appear then push the lever. Again the screen is divided into two parts, the top showing a side view of the tower, the lower section the platform from above.

Level Five has Bastian on horseback, fleeing from the evil queen's spell through the Orchid Forest. Press fire to make the horse jump over obstacles.

Bastian tries to jump over the river, but is caught by the spell and, falling into the water, he must try and grab a branch while avoiding the hazards and dangers in the river. Watch your energy on this level!

The Final Conflict, and seventh level, pits Bastian against the evil sorceress herself.

Gameplay variation between the levels redeems this otherwise boring game. On having little success with finding the rope on Level One, I was just about to quit when lo and behold I stumbled across it completely by chance! Level Two is such a contrast, you'll have to have your wits about you. Unfortunately, although extremely varied, none of the levels are very playable - and with the very high level of difficulty, interest soon wanes.

The Never-Ending Story II offers lots of variety, but very little interest - the first level is incredibly boring, and the second just crap. Gameplay is always of a standard, seen-it-before nature, e.g. Level One is just a platform-and-ladders game where your task is to find the exit, avoiding the baddies en route. (I thought they looked like sacks of manure!) The second level is a crap driving game that plays just like Buck Rogers, and... I can't go on!

Graphics 61%
Unspectacular but a pat on the back for variation.

Sound 35%
Good title track, but after that - zilch.

Hookability 27%
Difficult to find the rope in tedious Level One maze.

Lastability 59%
Each level has a different type of gameplay, and there's certainly a big challenge - if you can bear to stick with it!

Level One is just a platform-and-ladders game where your task is to find the exit, level two is a crap driving game... and I can't go on!