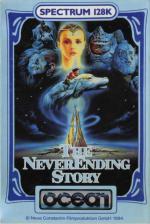 The Never Ending Story - it was originally a novel, then a film, and has now resurfaced as a computer adventure game. The micro version of the story is a graphic text adventure with illustrations for some locations, all objects and some special events. The game is split into three parts comprised of over 100K of data and code. Objects carried and the current 'condition' of your character is carried from one part to another.

The use of graphics in the game is relatively unusual compared with the majority of graphic adventures. The screen display is split in two halves, with the lower section reserved for the adventure's text. The graphics inhabit the top half of the screen. This itself is in turn sub-divided. There is a background scene which fills the graphics area and other graphics are printed over this. These 'other' graphics include pctures of every object in the game. Although you can only carry five at a time, only five can be displayed at one time. The sixth place in the object display is taken up with a cute picture of one of your two possible companions.

Larger screen illustrations for locations and special events are displayed in the top left of the screen. The instructions claim the graphics are not intended to replace the text but merely to enhance it. They are certainly not sophisticated enough to replace the text, but the neat layout and interesting little pictures certainly add something to an otherwise lacklustre game.

As to the story itself, it broadly follows the plot of the original book. The game is set in Fantasia, a word of the imagination facing extinction by the 'all-consuming nothing', eroding its very fabric and condemning it to oblivion. The world needs a hero from the 'Real World' (that's you!), someone who will believe in Fantasia and so save it from disaster. In the game the player takes the part of Atreyu, and must find the saviour of Fantasia. Only through your endeavours will the kingdom be restored to glory. There is certainly nothing in the plot that adventurers would see as particularly original. It's another variation on the old fantasy land plot. The colour graphics add something to this game, making it an enjoyable, if standard, adventure.

The colour graphics add something to this game, making it an enjoyable, if standard, adventure.