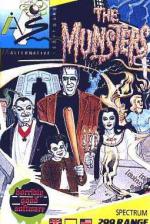 The antics of the weirdest sit-com family this side of the Brady Bunch form the basis of this debut game for Again Again, the full-price label of Alternative Software. And what an unauspicious debut it's turned out to be. Allow me to elaborate.

Marilyn, the only member of the family who could be described as human, has been kidnapped by "Old Nick", and being the kindly family they are, the Munsters rally round to save her. Lilly Munster has to roam the Munster mansion, blasting the massed ranks of Old Nick's ghoulie army with magic fireballs. Certain nasties are stronger than others, and to deal with them Lilly has to destroy lower-ranking ghosts to build up her spell power, providing her with more potent fireballs to fling. Hidden throughout the play area are mystery objects which allegedly help take care of the ghosts, but none of the items I picked up seemed to improve Lilly's chances.

The real pain in the bot (with both versions tested) is that you can spend ages just blasting ghosts to build up your spell power (which is a pretty boring task), then unexpectedly run into an indestructible ghost and lose all of your energy in microsends. And because you only get one life, that's the end of the game! Consequently, you don't get the chance to do any serious exploring or puzzle-solving so there's no feeling of progress, only bags of frustration.

The graphics on both versions are average, but the detail on the backgrounds does tend to confuse the action in the foreground. At least they successfully recreate the look of the series, which counts for something.

The use of the sound in both versions is pretty limited, adding norr a lot to the atmosphere at all. The programmers of the ST version have provided it with some mediocre spot effects and a rendition of the TV theme tune which is quite jolly first time round, but becomes plain annoying after it's been repeated for the umpteenth time.

As you've probably guessed, I wasn't all that keen on The Munsters. The standard of programming almost reaches average, but there seems to have been very little thought put into the game design. I would baulk at spending ten quid on the Spectrum version, but would faint at shelling out twenty of my favourite coins for an ST version which is little better. Not a game I would recommend, even to The Munsters' fans.

Not good. The standard of programming almost reaches average, but there seems to have been very little thought put into the game design.