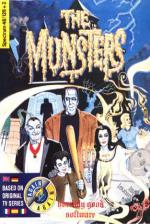 What do they mean, Again Again? Have we seen this game before? No we haven't, so what's the crack? Oh. Again Again is the sister label to Alternative Software, eh? Hmm.

The Munsters made a welcome return to the screen when Channel Four began re-showing programmes from the sick sixties. (Most of you weren't around then, I know, but you didn't miss much. In fact, The Munsters, Batman and The Monkees were some of the best bits and you've probably seen them.) But what about a computer game for the eighties? Hmm, I don't know?

Admittedly the game is a state of the art, multiload arcade adventure with nice big sprites wandering around the Munster mansion, and horrid little flying sprites, and big characters chasing you. BUT when all is said and done it is still just a pick-'em-up/shoot-'em-up!

In look and feel the game resembles the Rocky Horror Show (remember that?) and this is no big surprise. You wander around the mansion picking up mystery objects in the hope that you can rid the place of flying gribblies. You have 'spellpower' and you limply throw these balls of spell at the flying creatures and they explode — sometimes. Some of them are impervious to your spells, unless you hit them more than once. And your spell power, indicated by the level of juice in the bottle on screen, drops each time you get hit by one of these creatures. Pretty regular fare, I think you'll agree, nosepickers. The dippiest thing about the game is that you only have one life. Why insist on that point of realism in the plot when the rest is so improbable, hmm, mon petite chuckie eggs? No reason at all. as far as I can see.

So what's the verdict on this Munster monster multiload? I think it should have been left in the dungeon till Again Again came out with a better idea. Fans of the series will like it for the tie-in, but don't expect anything too special. Still it is a large game, so offers reasonable value.

TV tie-in, based on sixties monster show, from the makers of Terramex, but not as good.

TV tie-in, based on sixties monster show, from the makers of Terramex, but not as good.