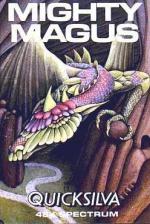 Mighty Magus can be best described as an arcade D&D game set in the 30 levels of the Rising Sun Temple. The temple is the haunt of warlocks, wizards and fierce dragons. There is an element of Jet Set Wily in as much as the various platform levels are connected by stairways up or down which you can walk, or jump through to ignore them. The overall object is to descend to the depths to confront your arch enemy, the dragon Fraugy The Fierce, and then escape by returning to the spot at which you commenced the game. There is no fixed exit, and each game resets the entire layout of the temple.

The screens scroll along with the movement of your hero, the Mighty Magus, a graphical cousin to The Alchemist from Imagine's game. On his travels he will encounter many hazards, some less obvious than others. The large nasties can be taken care of either by running away, fighting them or casting spells - you can jump on top of them too. Fighting and spell casting will rely on your strength versus that of the meanie. The floors are dotted with magic squares which may teleport you somewhere you didn't want to go, or knock you backwards. Other squares kill the unwary and some spring lethal traps. Chests and rubbish heaps will yield up various useful and not so useful goodies when they are searched. To the right of the playing area is a status panel with score, lives, power, magic levels and items collected.

Control keys: preset are A/D left/right, S to search, F to fight, J to jump and 1 - 9 to select spell strength, but the main control keys are also user-definable
Joystick: almost any via UDK
Keyboard play: you have to be quick making up your mind which strength keys to go for
sometimes, generally responsive
Use of colour: above average
Graphics: reasonable although a bit on the small side, and the 'bricks' are purposefully confusing
Sound: poor
Skill levels: 1 with progressive difficulty
Lives: 4
Screens: 30 floor levels of scrolling horizontal screens

'Quicksilva haven't been very active for quite awhile now and I thought that they may have gone out of existence. Mighty Magus is one of the more complex platform games I've played fora while - more like a Jet Set Willy, but greatly enhanced. It's something of a weird idea to be thrown into dungeons all on your own, but it does add to the atmosphere of the game, with lively monsters ready to rampage against you. Attention to detail is very good and the flaming torches are excellently done, they do look as though they really are burning. One of the ideas I liked is the 'search' function, where an object may look innocent enough, but if you search further, more may be revealed - something to constantly keep your interest. The graphics and colour use is generally very good, although there is not much sound. This game has many levels, that is room levels, not skill levels, although it is obvious to state that it gets more difficult the lower you go down. Mighty Magus is quite original, and although it might resemble Jet Set Willy at first, it is in fact the first real departure in platform games from the JSW clone. I think most people are going to find this an entertaining game'

'At first sight, without reading the instructions, this game seems to be one of those that is absolutely impossible as you keep walking over traps and getting killed off. But on further examination of the Mighty Magus, I've found that although it is very complex, it is possible to complete. It has nice graphics - a shame some of them are very jumpy - its sound is very poor although there's a good tune. The traps on the floor are very infuriating, only a few kill you like the arrows and the walls closing in on you, the rest just drain you of power. The floor is also very confusing as there are different types of 'brick' with different patterns and they keep changing so you are always jumping over something that turns out to be harmless and often landing on a real trap. l enjoyed playing Mighty Magus as there was a lot of variation in play.'

l enjoyed playing The Mighty Magus as there was a lot of variation in play.