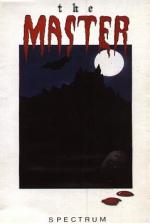 Artic Computing, once one of the big names in the Spectrum software marketing scene, have recently launched their own budget label and, like Creative Sparks, have kicked off with a platform game.

The Master has you chasing after a number of crosses in order to defeat a vampire who lurks somewhere in the final screen of the game. The crosses are situated on the many levels of platforms on each screen and, of course, these platforms are patrolled by an assortment of deadly beings who stand between you and the crosses. Once you've collected all the crosses on each screen, you can then make your way to the exit which leads onto the next one.

All the screens that I've been able to reach so far have been named after and based upon well-known science fiction films such as Blade Runner, E.T. and Raiders Of The Lost Ark. So on the E.T. screen, there are platforms patrolled by little extra-terrestrial type creatures and men in space suits.

The best thing about The Master is that the screens have clearly been well thought out in order to present you with a real challenge. It took me ages to get past just the first screen, but the game was sufficienty addictive that I enjoyed the process of trying to get through, even though I was having to tackle the same obstacles over and over again.

The addictiveness of the game makes up for the fact that the animation is a bit flickery and the colour combinations on most of the screens are a bit rough on the eyes. There's also one sneaky little feature in that the crosses you're trying to collect are themselves deadly from time to time! Every now and then they burst into flame, and I often found that I was so busy working out how to reach the crosses that I didn't notice when they were on fire and lost several lives as a result, just when I thought I'd managed to clear the screen.

The only "less-than-addictive" feature of te game is that you have to go through the screens in a fixed order, and after a while gong through the early screens time after time, it could get a bit boring. But at £1.99 this is an enjoyable budget title and will probably be good fun for the younger Spectrum owners.

The addictiveness of the game makes up for the fact that the animation is a bit flickery and the colour combinations on most of the screens are a bit rough on the eyes.