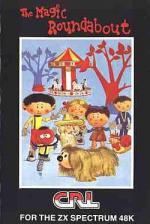 Dougal was in the Enchanted Garden of The Magic Roundabout. As always, he was trying to find some sugar lumps to eat, which someone had scattered over the ground.

"Look," said Dougal. "Someone's left all this sugar around. It's just what I need to keep my strength up while I'm trying to build my house."

Mr McHenry shot past on his trike. "Can't touch me either," he panted. Ermintrude appeared. "Well, hello dears," she said. "I hope you're all enjoying the game. Whoever drew me is pretty good with computer graphics."

Dylan arrived. "Hey man, what's all this excitement?" he said. "Can't I get back to sleep?" Dougal appeared. "I don't know why you're so happy," he said to Ermintrude. "You may have been drawn well but I look like a loo brush. And the screen scrolling is awful. Now, if you'll excuse me I've got a house to build. And I'm almost out of sugar."

"I told CRL that I could have done some better sound effects for this game," said Dylan. "But they wouldn't listen. Now hear what they've done to it. It's awful."

"Bother!" said Dougal, rushing past. "I'm out of sugar and I've used up all my lives. I bet the game will end now."

He heard a springing sound, and looked up. "Time for bed," said Zebedee.