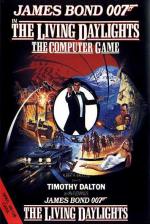 The name's Berkmann, Marcus Berkmann, 007, licensed to review. You must be Ernst Stavro Blofeld, or possibly not, 'cos not even that cat-wielding charmer would be dumb enough to buy this load of old bondage. Yes, the curse of Bond has struck again!

First, let's not compare this to A View To A Kill, which was, think we'll all agree, one of the very gruesomest big-name games ever to appear on the Speccy. This is not quite the same standard as that famous disaster. But it is, by any standards, a major disappointment.

As Bond, you must shoot your way through eight levels before coming face to face with Brad Whittaker, the evil arms dealer (played in the fillum by Joe Don Baker). The plot of the game follows the screen version surprisingly closely, although it turns out that every level is essentially the same. You start at the left of the screen and then must run across from left to right shooting everything that moves. You can't actually do both at the same time - you shoot while standing still, and while running you're open to attack. Being Bond (Bond is good - too good) you need to be shot about 600,000 times before dying, but even this may not be enough to take you to the next level.

In every scene you move Bond through a three-speed scrolling landscape (Very technical, Q) trying desperately to toggle between running mode and shooting mode. Between levels you have five seconds to choose which weapon (oo-er) to use on your next attempt - some are virtually useless while others zap almost everything (trial and error will tell which). Each of the eight levels needs a slightly different technique, and usually a different weapon as well.

All very nice, but I'm afraid that for me it just doesn't work at all. I can see that Domark has moved mountains to avoid repeating its last Bond film fiasco, but this effort falls between about 68 stools in trying to produce a decent game. Colour clash - what everyone always complains about in Speccy games - is particularly vicious here, so that the moving cursor, which you need in order to fire at snipers and other assailants, is often all but invisible. And the rest of the graphics just aren't clear or well defined enough to let you work out what's going on. Add to this the lack of variety between levels and you end up with something which is not worth £10 of anyone's money. It's a pity, 'cos the Amstrad version was pretty slick. My impression is that the conversion from more sophisticated computers was a little more rushed than it might have been, or perhaps it's a game that's fundamentally unsuited to the Speccy. As Bond villains always say, "Very clever, Mr Bond, but not quite clever enough."

You're unlikely to be shaken or stirred by this piece of Bondage - even Roger Moore would raise an eyebrow!

As Bond villains always say, "Very clever, Mr Bond, but not quite clever enough." You're unlikely to be shaken or stirred by this piece of Bondage - even Roger Moore would raise an eyebrow!