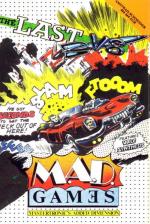 The conversion to the Amstrad has been waited for with baited breath ever since it was first rumoured that Commodore owners weren't to have a monopoly on this excellent game - now it's here.

As mentioned before, the plot of the game is very Mad Max is - the world has been devastated by nuclear war, you were saved by being a member of a top secret government project, working in an underground bunker.

Eight years pass and the radiation has lessened to a stage where it may be possible to visit the surface once more. As a personal project, you have the last surviving V8 sports car that you owned some thirty years before. It is now heavily modified, with built-in computers, extra long range tanks and anti-radiation shielding.

You set out to look for survivors, but before long you receive a message to return to base as one of the old. A bomb's stored away in some ancient vault is set to blow. It is from here that the game is set.

In the Commodore 64 version that start of the game is heralded with an announcement in software synthesised speech. Indeed, the packaging for the Amstrad version claims speech but I have yet to find any.

The game starts with a race against time to get to the entry bunker of your research establishment before the bomb blows up.

The top half of the screen shows a plan view of the terrain around your car. The bottom half shows status information such as time remaining, shield strength, fuel and distance to the base.

You now have to navigate through the countryside (looking embarrasingly unspoilt despite the ravages of nuclear war, but you've got to allow poetic licence to give you something pretty to look at instead of craters and things).

The road you have to navigate is very twisty and moves around your car in a four-way continuous smooth scroll. This is slightly more jerky and slower, but you have to allow for the limitations of the Amstrad's graphics compared to the Commodore, especially as the game was written with the Commodore in mind.

This slight slowing down makes the game a bit easier to play, but that is no fault as the game is already (to coin a phrase) a pig to play.

When you have completed this section of the course you drop down into the bunker proper. From here you have to negotiate a maze of tunnels through the base. As an added incentive (the bomb has already gone up so there is plenty of time left), some area are radioactive, so you have to avoid these.

There are a number of alternative routes to the base, so it is wise to make a map and pick the least radioactive - though that may be the longest way round. After this, who knows, though I've got as far as the sign saying 'sci base' I don't know what lies beyond (in my surprise at getting so far I drove into a wall!).

All the time that this is going on there is stirring music playing along in the background, this music fits the game perfectly and is at just the right balance - much better than the usual repetitive Hubbard tunes that most games seem to have at the moment. The music is slightly different to the Commodore, there's less bass. But this is made up for slightly with an overlaying melody that crops up occasionally.

Overall, an excellent game at the price, all the things that impressed me about the Commodore game are still valid here - especially the graphics. Well worth the money for this especially challenging game.

An excellent game... All the things that impressed me about the Commodore game are still valid here - especially the graphics.