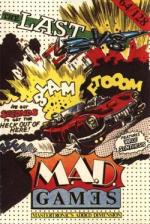 The Last V8 puts you in a pretty enthralling situation. The year is 2008, seven years after World War III and the nuclear winter has just about passed. Civilization was destroyed by the devastating war, but you were working deep underground when it happened and therefore survived. During the time you've spent in the shelter, you worked on a project: The Last V8 which is based upon a car you owned.

Over the years it has been built up and customized to withstand the hostile environment which was once the world. Complete with radiation shielding, turbo engine and computer linked to its station, it's ready to take you out in your search for the remnants of mankind.

However, on your first foray a siren sounds warning you of an imminent strike from delayed action warheads which detonate periodically. You only have a tiny amount of time to get back to the base, and it's up to you to steer the last V8 back to the base.

The screen is divided into two parts - the car's instrument panel and a scrolling aerial view of the track. The instrument panel has no real significance to the game, it just tells you the speed you're going. The upper half of the screen is the most important, since it is using this that you play the game.

The Last V8 has the same type of control as Paradroid - if you point the joystick in a direction then the car goes that way. If you want the car to slow down then you have to push the joystick in the opposite direction.

The game starts with spoken message V8 return to base - immediately and you have to get back to the base before the timer reaches zero. WWIII doesn't seem to have been as devastating as we were led to believe since there are still roads the V8 has to religiously follow. If the car goes off the road then it explodes and the game has to be restarted.

If you manage to get to the base within the time limit then you are transported to a second, trickier landscape and the return to the base starts over again.

I honestly expected something special from the MAD range, as Mastertronic have been coming up with some really good product of late. Unfortunately the game boosts nothing more than attractive graphics and brilliant music. The control of the car is ridiculous, making the game virtually unplayable. I found myself becoming increasingly frustrated with every game as I died for the umpteenth time. The delay before play is also annoying - some garbled speech informs you to 'return to base, immediately', and it soon loses its 'gimmicky' property. It's unfortunate that the actual game is so poor, as both graphics and sound are of a very high quality. A lesson to be learned, perhaps Mastertronic?

Despite beautiful graphics and promising scenario, The Last V8 falls down because of it's sheer unplayability. The control is almost impossible to handle. The only problem is the way the joystick is used to move the car. It just doesn't work. When it comes down to it, the only reason I played The Last V8 for the time I did was so I could see the graphics on the rest of the game. The music is very good, yet another Rob Hubbard classic. What really got on my nerves was the speech synthesis before the start of each game. Man, it really grated; too much of this and you'll be reaching for some downers. Though beautifully presented, The Last V8 didn't live up to the graphics its been blessed with. Not a lot of cop I'm afraid.

When I first heard the outstanding music and saw the excellent graphics I thought this was going to be something really special. After trying to play it I decided it wasn't. The Last V8 is totally unplayable due to its immense difficulty. Trying to control the car is difficult. But being forced to drive it at huge speeds to get back to the base safely because of the time limit was just too much - it would be tricky enough without the time limit. It's a shame MAD couldn't have made the game more playable, especially since it does have amazing graphics and backing track, but as it stands it's a piece of very below average software.

Presentation 58%
Nice demo but no game options and annoying delays.

Value For Money 45%
Cheap, but there are cheaper and better games.

Excellent static display... Initially, frustration drives you on but it's soon quelled by the game's total unplayability.