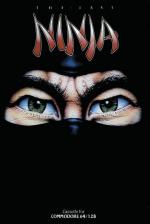 Perhaps System 3's The Last Ninja should be renamed The Ninja At Last or At Last The Ninja.

It's been an incredible eighteen months or so since word of this martial arts epic began to spread. Now I can proudly boast that I have seen the C64 version of the game.

Fans of System 3 games will know that they haven't got the greatest reputation for bringing their games out on time. But when the product does make it onto the shelves, it's usually been worth the wait - witness the ultimate success of International Karate.

So is The Last Ninja worth the wait? You bet it is. Just when you thought nobody would come up with a new and interesting twist on the martial arts formula, System 3 manages it.

The Last Ninja is a combination of fighting, exploration, strategy, object finding, all mix up with some really excellent music which, besides providing a background to the game, considerably enhances the atmosphere and adds to the excitement.

The game is big, coming in six loads. In some games multi-loading can hinder the smoothness of play, but with The Last Ninja that doesn't happen.

The ultimate aim of the games is to guide the Ninja and find the secret scrolls hidden in the palace at the end of the game.

The first two loads are set in what could be described as a wilderness outside the palace, filled with swamps, rivers, shrines, trees, bushes, birds, evil guards and dragons.

The Ninja must explore his environment. The only weapons he has to start with are his hands and feet. By exploring everywhere he can collect a sword, throwing stars, staff, flails and smoke bombs. You really have to search for these because some are really difficult to find.

That was especially true for me on C&VG's battered television.

But the trick of picking up an object is a little difficult. Getting in the right position is essential. You have to sort of bend and get the ninja's hands to reach out and touch the object.

That's okay if you can see it. But sometimes the object is totally hidden, such as the extra life-giving apple hidden in a tree.

You have to collect certain objects to be able to complete the level.

By approaching the shines and praying you can get a clue about what is needed - a sort of divine inspiration.

All you have to do is approach the shrine and you automatically kneel down. An object which it would be a good idea to collect appears in a window. For example, in the first load it is necessary to have a pouch.

Fighting with guards will obviously sap your strength and with just three lives to play with, it's as well to pick your moment before a fight. Not all the guards are of equal ability, some you can outrun, others are of the same skill as you, while others can give a really hard time.

The movement of the Ninja is really neat, a nice touch being that he can walk backwards and through 360 degrees.

To complete each level you have to complete a task. On level one, it's how to get by the dragon which pops out of his cave. It's impossible to get by him without being turned into a bundle of burning bones. The trick is to get him to sleep. But how, that's the problem.

The graphics are really neat, especially in the later stages of the game in the dungeon and palace. And there are lots of nasty surprises waiting. I only hope that all you non-C64 owners don't have to wait too long for conversions.

The Last Ninja is a winner.

A winner! The graphics are really neat, especially in the later stages of the game in the dungeon and palace. I only hope that all you non-C64 owners don't have to wait too long for conversions.