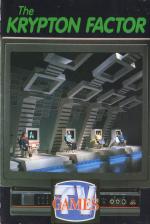 With Blockbusters, TV Games came up with a brilliant little game. It was fun, addictive, made you laugh and really captured the spirit of the television programme it was based on.

The Krypton Factor is, however, a far less successful attempt to bring the quiz and task show to the computer screen. And that's not really the fault of the programmers but the rather restrictive format of the TV show itself. It doesn't really lend itself to the home micro and the resulting game I found very slow to play. Almost tediously slow, in fact.

The game's individual parts are all taken from the show and each has to be loaded separately, which again means there's a lot of sitting around doing nothing with the cassette version. All are played against the clock.

Up to four people play, each selecting the character they want to be from the eight supplied, although you can change character details if you want.

The first section is mental agility. Here, a series of numbers is flashed onto the screen. Each player must arrange the numbers in their head in correct ascending numerical order and re-enter them into the computer. This is real brain-buster only for memory man and women.

Next is the observation round. A story and related picture are shown. The story scrolls along the bottom of the screen. This is shown twice and only certain changes are made to the picture and story which you have to spot. This section was so boring that I nearly nodded off several times.

The response round promised some action at last, or that's what I hoped. Some hope! What you have to do is move a cycling machine from one side of the screen to the other. The keys you hit must be hit at different rates. The second part of this section tests colour sense. At this stage, the colour temporarily gave up on my TV so I decided to skip this section. I didn't think my life would be a lot poorer without it.

The physical ability section is the Krypton Factor assault course. You are presented with a view of the course from above and the characters are controlled with four keys, each representing strength, stamina, arm power and leg power. You must tap the appropriate key at the right moment. The action I hoped for to liven up the game turned out to be pretty tame stuff.

The intelligence section sees you trying to re-assemble a puzzle, and the general knowledge part is fairly obvious. In fact, this last section was the most enjoyable bit for me. It's a pity I had to plough through the other bits to get to it.

I can't fault the Krypton Factor and say it's not a faithful representation of the TV programme because it is. And that's where the trouble lies. The programme isn't really a suitable subject for a computer game. It's too much of a mishmash of tests, skills, intelligence and strength to form a comprehensive game.

For faithful TV fans only. By the way, marks for graphics and sound are almost meaningless and are not the essential part of the game.

For faithful TV fans only. The programme isn't really a suitable subject for a computer game. It's too much of a mishmash of tests, skills, intelligence and strength to form a comprehensive game.