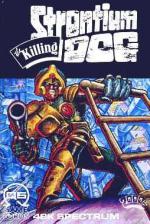 And I'm glad to report that this Strontium Dog game is far better than Quicksilva's first stab at a Johnny Alpha game. That was The Death Gauntlet for the Commodore 64, which left a lot to be desired.

Strontium Dog: The Killing is a different can of worms. You control Johnny in a deadly mission on a strange planet wheree the Dictators stage a strange contest.

They invite all the most deadly killers from all over the galaxy to compete in an evil olympics - the winner is the person who comes out alive!

Now Johnny Alpha reckons that a trip to this planet at the time of the games is a good way to wipe out all the top criminals and earn himself a great bounty-cheque into the bargain. This is where you come in.

The "games" takes place in a maze-like complex of rooms and corridors. Johnny has to explode the many levels of the complex, discover the alien killers and destroy them.

Sounds simple, but when you come to play the game, things get more difficult - as usual! The alien criminals are crafty and wait to ambush an unsuspecting Strontium Dog in the various chambers of the games complex.

The game is a biggie - and it's a good idea to have some paper and a pen to log your movements through the complex otherwise it's easy to get lost. You also have to work out different strategies to wipe out the various nasty alien criminals you come across.

The graphics are good - but the sound leaves a bit to be desired. Even on the Spectrum.

The Johnny Alpha character is well drawn and animated. You can actually recognise him as the 2000 AD character!

He is armed with three electro-flares and his trusty laser gun and gets five lives to complete his quest. The screen shows you a display of Johnny and the room he is currently in, plus read outs of lives left, and the number of alien killers still around in the complex.

The Killing falls into teh currently trendy arcade adventure style of game. I found it entertaining to play and kept coming back to explore more rooms.

Two annoying things about the game. One is the fact that you keep having to come back to the intro screen before restarting a new game, once all your lives are lost. Although this is nicely drawn and quite entertaining, it becomes a bit irritating after the twentieth viewing. But if you get really good at the game, you're not going to see it much anyway, are you?

Second, the instructions could give you a bit more information. I know it's nice to have a bit of mystery about a game - but personally I would have liked a bit more documentation.

Maybe if you are a 2000 AD reader, you could - as Quicksilva suggests - dig out some back numbers and read again a Strontium Dog story called The Killing. I liked The Killing and will be going back for more as soon as I've found those old copies!

I liked The Killing and will be going back for more.