Published in Your Sinclair #77 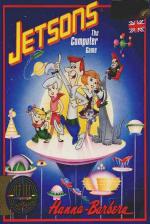 Saturday mornings are a bad time for me, I either get up ridiculously early to catch a train to some throbbing metropolis or I have a well-deserved lie-in. Which ever way I decide to spend my weekend, Saturday morning television is still a no-go area. So I can't really say that I've seen the Jetsons recently, cos I haven't and I never lie. Well hardly ever.

The Jetsons are the perfect space age nuclear family. There's Mom, Pop, a pretty and no doubt clever daughter and a cheeky but charming little son. Oh, and a dog. The whole family are clean and neat with fashionable haircuts and very white, straight teeth. And that includes the dog.

It seems like we've been waiting ages for Jetsons the computer game (and no, that's not a mistake - there's no 'the' in the title) and I, at least, really did have high hopes. I was so sure that Jetsons was going to be completely funsome that I grabbed it as soon as it came into the office and demanded to be allowed to review it. (I can be incredibly silly at times.) I pulled off the wrapping, ooh-ed and ahh-ed at the beaut poster and had a quick flick through the instruction book. And then I played the game. It was ten o' clock in the morning and the first disappointment of the day.

Jetsons is a collect-'em-up with four levels, each with two parts. You start off playing George Jetson and the idea is to pick up all four family members in your bubble spacecar and take them off to the beach. You also get to take on three other roles - Jane the mom, Judy the big sis and Elroy the annoying little tyke. Each character has to perform a certain task by collecting hidden objects.

To find the all-important objects your have to work your way through a series of rooms avoiding obstacles and jumping around on conveyor belts. The rooms have various exits, there are the more usual doors as well as spooky tube lifts that transport you to a completely different room. You'll come across something like this in he race sections too. This can actually be quite handy, but only if it means that you comes across an object.

These objects are incredibly elusive and this is where the game falls down. Load up the game and at first it'll seem quite tough. So, as is the general rule, you persevere. Usually, this attitude bears fruit and you find yourself getting a bit better and a bit further each time, but not with Jetsons. Ho no, this is one of those incredibly annoying games that have a ridiculously difficult first level. This is a big mistake on the part of the programmers, the best games are those that have deceptively easy first levels. You start off thinking it's dead easy and you'll finish it in one sitting. Before you know it, it's two o' clock in the morning. You're pulled gently into the game and it gets more addictive as it gets harder. Those are the game that you play over and over again, convinced that you're going to finish that darn level this time.

Jetsons has one thing wrong with it, it's impossible to play. Unfortunately, this makes the nice graphics, easy controls and what sounds like an interesting game completely worthless.

A disappointing cartoon collect-'em-up/racer severely lacking in the playability department.

A disappointing cartoon collect-'em-up/racer severely lacking in the playability department.