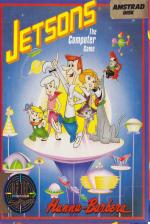 Hurrah! It's everybody's favourite second-rate Flintstones In Space, The Jetsons, in Hi-Tec's latest Hanna Barbera licence, Jetsons - the "computor" game. This game is born of a world inhabited by crap graphics, poo-poor playability and misspellings of "computor" on disk labels.

Yep, you guessed right, this is another of those hatchet jobs we go in for every now and then. Let's start by savaging the plot: George Jetson wants some time off work to go for a picnic with his family. Er, and that's the plot. Savage, savage, savage.

The first level is a boring walk-'em-up in which George has to collect three items; at least one of which you will never find even if you play until you've got a big white beard growing down to the floor (women too). You fall through the floor a lot. Oh, and there's some chutes to shoot up.

The second level is a 2D shoot-em-up section, and there's three further levels. Unfortunately, no-one's *ever* seen them. The first level is so tiresome and tricky, you will be driven to despair. Let's ask some of Future Publishing's most experienced games players how they fared:

"It's so crap. No-one in the office got past the first level," Linda Barker, Your Sinclair.

"Half an hour with this game is enough to put you off the nauseating bunch of space age gets for life." Neil West, Sega Power.

Imagine walking through the same ten badly-drawn rooms over and over again for the rest of your life. Now you too can experience the pain and suffering of purgatory, without even leaving your bedroom.

There was a rumour buzzing round the office here last week (we think James Leach started it) that the Hi-Tec staff were being held hostage in their Sheffield office by a mad gun-man. In the event, this rumour turned out to be false. The other rumour currently buzzing round the office, that The Jetsons is a dreadful game on any machine, is a whole lot more believable.

If this was a Eurovision Song Contest entry, it would get "nul points" (largely because it's not a song, but you know what we mean!).

It looks OK when you load it, but it's not long before you're screaming with frustration. Has anyone got off Level One? I couldn't find anyone!

Play it for a day? You must be joking...

Graphics 39%
Is that George Jetson or a painted plank of wood?

Staying Power 05%
...which no-one has ever got off (difficult, boring, repetitive, etc).

If this was a Eurovision Song Contest entry, it would get 'nul points'.