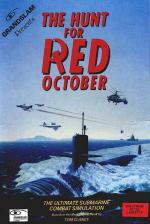 The Hunt For Red October

Things have come a long way since the days of Captain Pugwash. Apparently the latest totally and utterly secret weapon to emerge from the Russian equivalent of "Q" is Red October, wickedest of the wicked where submarines are concerned.

What's more, you (the captain) have decided to defect! That's right, you've had enough of joining an eighteen mile long queue just to pick up a copy of the latest Beatles record. You're off to the West, where flared Levis and ZX81s can be bought with a mere three months wages.

Easy, you might think. You've got the latest in sub-aqua hardware, complete with 26 nuclear ballistic missiles and the unique Caterpillar propulsion system. Not so! For a start the entire Soviet Navy is out to get you, and the Americans are still wondering whether it's all some double bluff. Only your crew are still in the dark, and you gotta keep it that way until you're safely across the Atlantic.

As you'll be able to tell from the way the game's set out, its roots lie firmly in the various 16 bit 'puters. (Good abbreviation, huh? Hope it catches on!) It's all icons, windows and the rest of it, and you control everything with a rather dodgy cursor that tends to go haywire at moments of extreme tension.

To drive the sub, orders are given out to the crew, who'll report back once they've been carried out. You can switch at will between a variety of displays, such as a map, sonar, radar and even the good ol' periscope.

Whoever converted the game to the Speccy, has obviously tried to keep everything as 16-bit-looking as possible, resulting in the graphics looking a bit mucky in places where they've been scrunched into our tiny screens. The backwards "R"s are naff for a start.

The main problem/advantage of the game is its massive complexity, depending on whether that sort of thing appeals to you. I'm afraid it's a bit easy to get overwhelmed by it all, and you'll be tearing your hair out from places you never knew had it.

A game not to be taken lightly. Make sure you know what you're letting yourself in for before parting with your pennies.

I'll bet you never knew controlling a submarine could be so tricky. Check it out first.

The Hunt For Red October

The main problem/advantage of the game is its massive complexity... It's a bit easy to get overwhelmed by it all, and you'll be tearing your hair out from places you never knew had it.