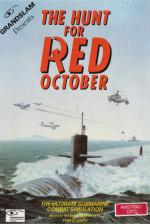 Red October is the latest Soviet nuclear submarine and you're the commander of it. Defection is your objective; the crew doesn't know about it, but the Soviet navy does. Can you reach the shores of America or will you be caught and sunk? The first thing you should do when the game loads is save it, because the first game is likely to last for only a couple of minutes.

The screen is split into four main sections: a column of icons to the right, a message window at the bottom, an information/command panel to the left and a main display. The icons allow you to change the engine and propeller type, look through one of the many periscopes and launch torpedoes. The message window shows what commands you have ordered and informs you of what's going on around you. The information/command panel shows your depth, heading and speed it also allows you to change them. Finally there's the main display which shows a map of the Atlantic, your periscope view and various other displays that crop up in play.

Fun is lurking deep within this game; unfortunately it's buried beneath a mass of frustration. Staying alive long enough to enjoy it is the major problem. Just when you think you've got the controls sorted out you get hit by a Soviet torpedo and have to start all over again. It's even worse if you didn't save the game as soon as it loaded because then you have to wait for the program to load again!

The graphics are simplistic, but there is enough detail and colour to make it look good. Sound is limited to the noises that you'd hear inside a submarine.

There are difficult games and there are games that are almost impossible to play; this is one of the latter. That's a pity because it looks good and with a little more care it could have been excellent.

Never in the history of warfare has so much been paid by so many for so little. Looking through the manual, you would think that this was an excellent simulation. It deserves such status because the game drowns you at the bottom of the Atlantic without fail. Completing Red October will prove extremely tedious.

The maps are a little tricky to interpret. US ships and Soviet ships look very similar.

Graphics 67%
P. Good use of icons.
N. Simplistic graphics, but they do their job.

Staying Power 58%
P. Reaching the US is a task worthy of Clint Eastwood.
N. But the frustration factor may stop you from even trying.

Expensive and incredibly difficult. Reaching the US is a task worthy of Clint Eastwood, but the frustration factor may stop you from even trying.