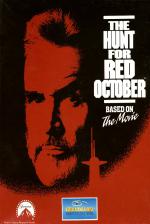 The Cold War may well be long over but when has reality ever been relevant to computer games? In the game of the film of the Tom Clancy novel, Marko Ramius - commander of Russia's most powerful nuclear submarine, The Red October - has been tempted by the West's good life and he's going there in his sub! The Russians are a bit annoyed about this and decide to sink him. However, Ramius does get some help from CIA operative Jack Ryan who sets up a plan to sneak the sub into the US.

A multi-stage game, the first task is to get Jack onboard the waiting USS Dallas. Only trouble is that he's dangling from a helicopter in a gale force 12 storm with limited fuel.

Control then switches to the Red October in which Ramius has to negotiate the horizontally scrolling caverns of Murmansk leading out to the open sea. Soviet subs and missiles constantly attack and Ramius can return fire with depth charges, homing missiles and torpedoes. Bonus weapons, invulnerability and points are to be found floating along. Hitting the Space Bar turns on the Caterpillar drive, accelerating the October for a brief period.

Back to Jack for the next stage as the USS Dallas's mini-sub attempts to dock with the October in a fast-moving current with a zero error margin. Survive this and Jack's got to open the October's airlock with a bit of joystick waggling.

The October then has to make its way to the US coast through another horizontal sub-blasting section.

Meanwhile the October's chef, Loginov is missing his vodka and caviar and gets angry enough to threaten to explode the sub's nuclear warheads unless it turns around. Jack has a final chance to save the day in a Cabal-style screen, taking pot shots at the chef who dodges between the warheads, returning fire.

Ocean's standard movie approach, using a familiar main game style with a couple of sub-games recreating key scenes has been copied by Grandslam to little effect. The worst problem is the main game is so dated - 'caterpillaring' through yet another horizontally scrolling shoot-'em-up soon becomes rather tedious.

It also completely loses the realism, which was one of the main attractions of both the book and the film.

The sub-games are a bit better, but they're mostly very short and simplistic which makes multi-loading them on the C64 irritating. The end-game Cabal scene is okay, but the whole game is much too easy.

The Amiga version is tougher, with more ambitious perspective on the sub-games, but the lacklustre shoot-'em-up action is only more disappointing here.

Following the excellent movie comes Grandslam's attempt at a second game, this time aimed straight at the arcade crowd with some very standard sub-games. There's variety - but nothing in this mish-mash of game ideas that you wouldn't find in budget games, and completing it on your first go isn't exactly good for lastability.

Contrarily the Amiga game veers towards high difficulty in places, with an amazingly restrictive sub section, and then throws in some attractively done but laughably simple 3D sequences. If you want a game of the film then buy the game of the book - far better value for money.

Graphics 65%
Some good use of atmospheric grey shades but hindered by the dated look and feel of each section.

Sound 59%
Unsophisticated tunes but at least there's a different tune for each level.

Hookability 46%
Uninspired gameplay just doesn't add up to anything remarkable.

Lastability 32%
Far too easy even with the one-chance-only mini-sub section.

Graphics 58%
Unambitious horizontal sub-sections but the 3D for the helicopter drop and mini-sub scenes is fast and well executed.

Lastability 32%
Little in the way of all-round challenge to keep you playing.

Overall 39%
A mixture of relatively good-looking but dated ideas in a substandard mix.

A mixture of relatively good-looking but dated ideas in a sub-standard mix. 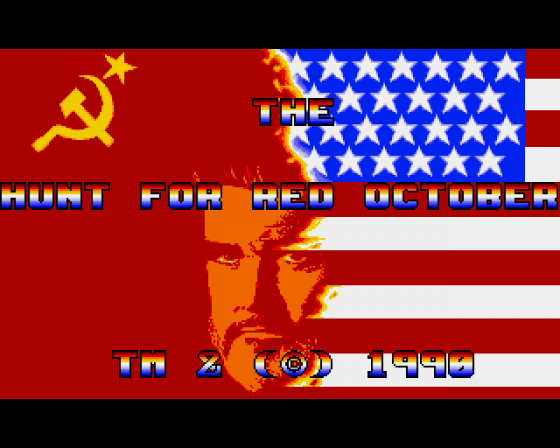 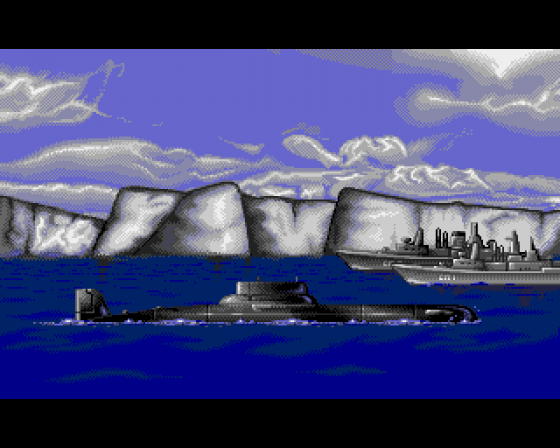 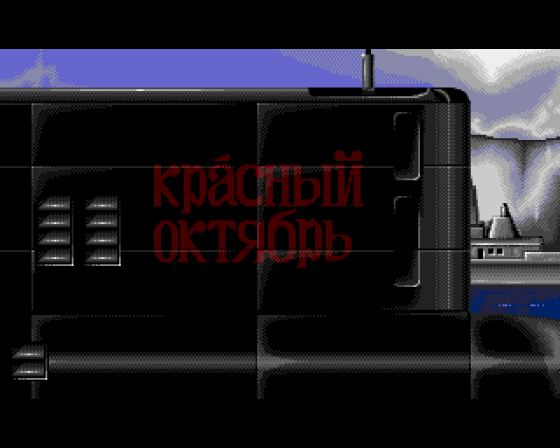 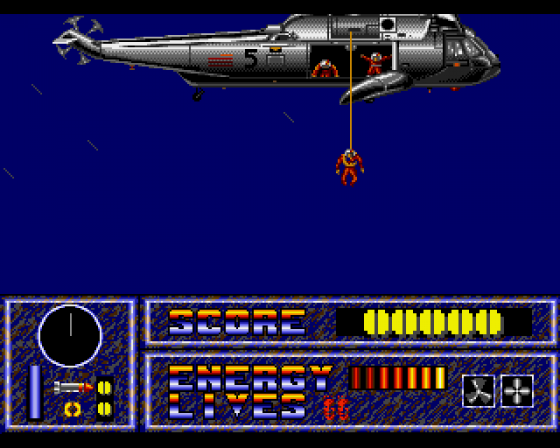 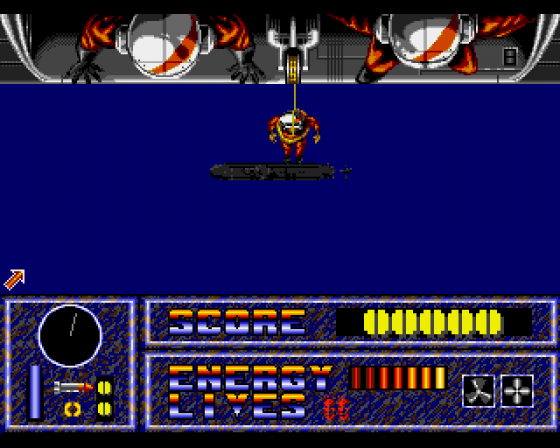 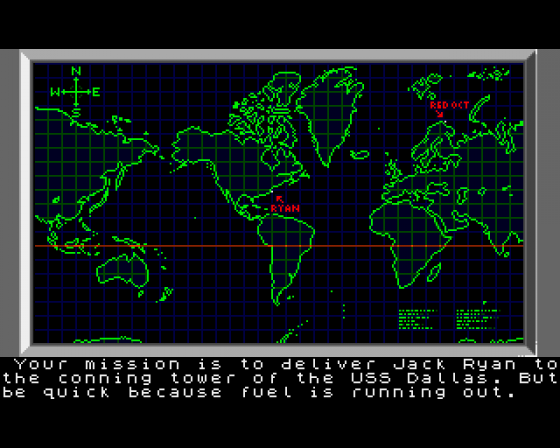 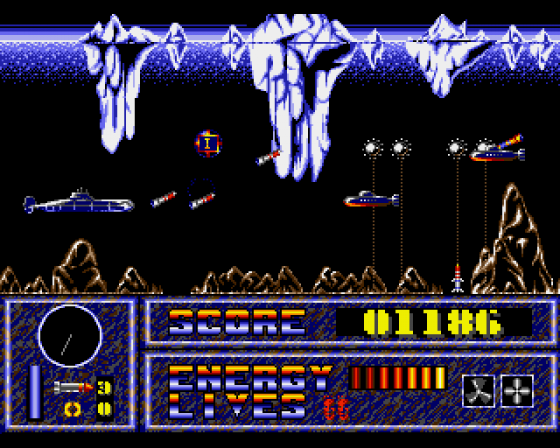 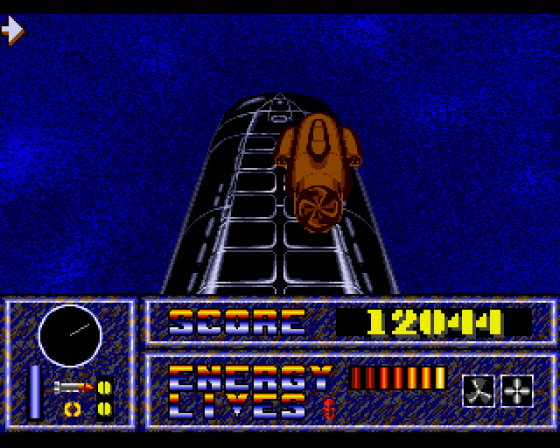 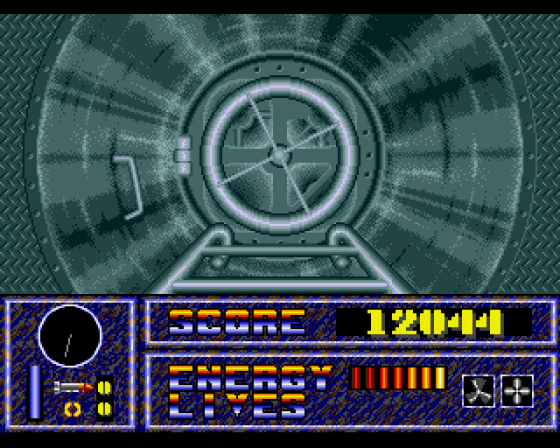 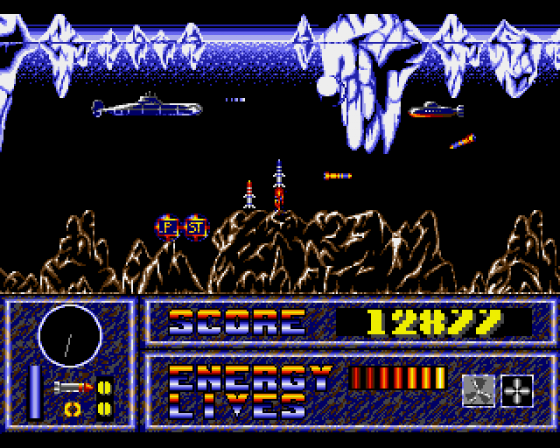