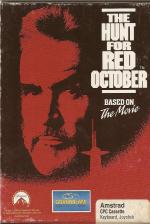 A game so good they made a film of it! Well, things didn't quite happen in that order: there was the book, then the game, then the Sean Connery extravaganza. Red October is a chase where the sub is pursued by its previous owner - the Russians - and hunted by its prospective owners - the US.

Why is this sub so special? The Red October is a sub that's so sneaky and stealthy, even its own crew don't know where it is, that's why. Using its revolutionary caterpillar propulsion system, torpedoes, cunning and firepower, you must guide the supersub to freedom.

To make the game playable, all the commands are icon-driven. As soon as it's been clicked, it's done. Your crew are that loyal. Or they will be until they find out you're defecting. Starting out at the head base of the Soviet fleet, you must first navigate your way through a maze of undersea canyons (known as Gorshkov's Railroad), while being pursued by other Red subs. All of whom want to send you to the bottom. Once out, then it's all hands below decks and off to the rendezvous with the US Navy.

Red October is an accurate representation of Tom Clancy's imagined wonder-sub. In fact, it could be said that the game is too accurate. The first few missions are spent seriously sinking, time and time again, as torpedoes rain in from all directions! Survive for ten minutes and you've got the record.

If you want to learn the inside story of today's wonder-weapons and are prepared to put a vast amount of time and effort into learning the basics of sub warfare, then Red October is for you. Gamers who like to meet with limited success reasonably quickly though, forget it. Red October is too realistic - your average Joe Punter would crash a nuclear sub at least once when let loose over the Reykjanes Ridge!

Involved and absorbing. Make sure you've got no appointments for the rest of the day if you want to get anywhere though!

Staying Power 68%
P. Stick with it and there's a lot to learn.

Overall 61%
A simulator that's too real!

A simulator that's too real... Red October is extremely complex. But stick with it and there's a lot to learn.