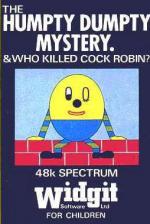 Side A of the tape, Humpty Dumpty, contains two programs, and side B contains Who Killed Cock Robin. The programs are aimed at developing skills in logical thinking and require the player to ask questions and make guesses based on answers. The mystery -? Which of the king's men pushed Humpty off the wall?

After a graphics sequence of Humpty being pushed off by a mystery soldier, all twelve men appear and the player may either ask a question prompted by the words, 'Did he have ...', or take a guess. Each of the twelve men have a name and some characteristic which distinguishes them, so that asking questions immediately eliminates some of the suspects.

The second game loads with a program contained in game 1. Here the player is given a glimpse of the culprit and must describe him. Five distinguishing characteristics must be entered correctly to describe the colour of the suspect's hat, badge, eyes, mouth and jacket. Both programs allow for children of developed spelling skills, and for early readers as inputs may be spelt out or selected by using the colour keys. Two skill levels make for easier and harder games.

Who Killed Cock Robin asks the daunting question, can sparrow's confession be believed? The player must find out who killed the robin, where and when by using clues and logic. Some reading ability is required and there are four skill levels.

The quality of the graphics in these games is very good, lots of large drawings, brightly coloured and with some simple animation. Describing the identity of the culprit In the second Humpty Dumpty game, is quite a skilful) process, and surprisingly difficult to get right, even for adults!

Describing the identity of the culprit In the second Humpty Dumpty game, is quite a skilful process, and surprisingly difficult to get right, even for adults!