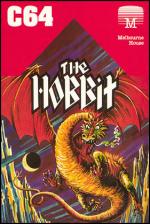 Perhaps the world's most famous Adventure game, and certainly the most ubiquitous, is The Hobbit. No sooner does a new micro show signs of becoming popular, than there is a version of The Hobbit out for it!

But one new version is a cut above the rest and that is the disc-only Hobbit recently released for the Commodore 64.

Commodore Disc Hobbit has two copy-protected programs on side one of the discs, one being a back-up in the event of the other failing. During loading, a hi-res title picture is displayed to the tune (yes, there's music all the way!) of the march from Aida. Aida? Well, I suppose it's out of copyright...

Once loaded, the player has the option of playing with or without graphics. If no graphics are selected, the disc can be removed from the drive and put away. Side two of the disc contains the new enhanced graphics and space for saved games. It is recommended that this is copied on to a back-up disc since, should it be damaged, you will not be able to play the graphics version. A utility, Melbourne Copy - is provided on the disc for this purpose.

Sound accompanies the game throughout, changing subtly from one theme to another, and on the whole is more in keeping with the story than the original excerpt from Aida. Going below into the goblin caves, where all was dark, produced some very eerie sounds and screeches and I really wished I could see what on earth was going on.

Congratulations to Melbourne House for at last being brave enough to bring out a disc version of a game that have been begging for disc treatment from the beginning.

Congratulations to Melbourne House for at last being brave enough to bring out a disc version of a game that have been begging for disc treatment from the beginning.