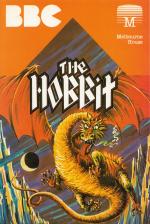 When The Hobbit was first released for the Sinclair Spectrum, one of its selling points was its graphics. When it was squeezed into the BBC the graphics were lost due to insufficient memory. This has now been remedied with the arrival of the disc version for the BBC computer.

The Hobbit is recorded on both sides of the floppy disc supplied. A double-sided disc drive is not required to read the disc as the disc is a reversible one. Side two is accessed by removing the disc and turning it over before re-inserting it. Before you can play the game with pictures, you must prepare your own picture discs. If you have 40 track drives then you will require two picture discs. If you wish to save your position then you must also prepare a save game disc. By now the game is becoming pretty heavy on disc usage!

The game can be played with or without pictures. Each time you visit a new location the drive whirrs away and a new picture is loaded. Pressing the Space bar toggles between the picture and its accompanying text. The constant accessing of the disc becomes pretty tedious as the pictures are not even all that good! Even when playing a text only game, the program still now accesses the disc! This has been used to provide more detailed descriptions of the places visited.

If you already have the tape-based version of the game then I wouldn't bother rushing out to buy this one.

Heavily reliant on disc-usage... The constant accessing is tedious... Pictures are not even all that good... I wouldn't bother rushing out to buy this one.