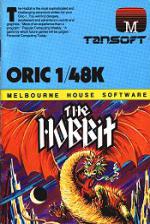 The Hobbit comes in the usual Melbourne House cardboard package together with a paperback copy of the book by J.R.R. Tolkien. Like the original Spectrum version, the Oric program boasts high resolution pictures that are 'painted' when you visit certain locations in the adventure. Over the past few months several 'Hobbits' have been released by Melbourne House for various computers. However, due to lack of memory space the BBC version doesn't contain any graphics.

Graphics are only two-colour on Oric, until the 8-colour pictures on the Spectrum. This doesn't detract from the art much, and the graphics are very nice to look at. I won't spoil the fun by describing the game plan, but suffice to say locations and people from the book make an appearance.

Talking of the people, the much vaunted Animaction algorithm - which supposedly lets animals and people interact with you 'physically' and verbally - turns out to be a disappointment. Thorin's vocabulary, for example, consists of telling you to hurry up, or sitting down while you're being eaten by a troll and singing of gold.

The Hobbit, on any micro, is a significant advance over simpler adventures written in Basic, but it doesn't, in my opinion, come near any of the Infocom series. For Oric, the graphics are very good, and I guess even at £14.95, the program is worth checking out.

On any micro, this is a significant advance over simpler adventures written in Basic, but it doesn't, in my opinion, come near any of the Infocom series.