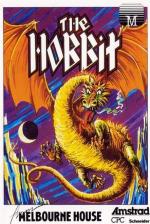 Here it is for the CPC464! Briefly, you play the role of Bilbo Baggins, the Hobbit from Tolkien's book. Your task is very simply specified: find the treasure and install it in the chest seen in the opening graphic sequence. Books have now been written as to how to get round the problems you will encounter on your travels in Wilderland. And there are certainly some problems to solve, though the copious documentation supplied assures you that reading the accompanying copy of the novel will help.

Unlike the Spectrum version, from which all the others are derived, this one features a really stunning loading screen, the like of which I haven't seen before on the Amstrad. It features a superbly drawn dragon in myriad colours. When finally loaded, however, the graphics faithfully follow the Spectrum's, with perhaps one or two improvements, though more slowly drawn. Many locations are illustrated this way, following the announcement of your arrival in a text window at the bottom of the screen. Instructions which follow it wipe it out, however.

It's hard to remember that this is the program which started the adventure revolution with characters to whom you can talk, who respond to you, and who have their own independent existence, carrying on with their business without you! Not only that, but instead of the usual verb-noun instruction, the input interpreter allows quite complex sentences.

It's very, very good, but rather dated now, as others have followed its lead. If you want the original, you must pay the rather over-the-top price.

It's very, very good, but rather dated now, as others have followed its lead.