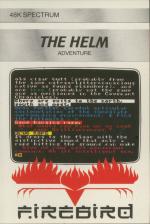 The Helm, a text-only Quilled adventure, is another Firebird game on offer at a budget price. The game's chief characteristic is a curiously verbose approach to the business of communicating with the player. These witty distractions dominate and dictate the character of the game and it is to the extent that you can stomach such incessant loquacity which will decide your opinions on this game. It is a little unfortunate the game combines such a windy style with a redefined character set which is so difficult to read along with curious colour combinations (like the dreaded red on black) as this slows the proceedings to a snail's pace.

Whatever the criticism that can be levelled at the long-windedness of the dialogue it must be said this game has a distinctive flavour and it would be wrong to assume everyone will find it too much to take. As in all comedy, some lines are really funny while others leave you non-plussed. To give you some idea of what you can expect here is a fair representation of some of the lines you will meet.

'Upon further opticular contemplation of the immediate surrounding environment I find the following', What would you have me do next your Brillianceness?'.

'Thy wish is my command your most eminent eminence. The task has been completely completed Sire'.

'Give me your next wondrous command oh all intelligent one'.

On cutting a rope loose you are greeted with, 'It drops to the floor with the distinctive sound that only a rope hitting the ground can make. Hit me with another gem!'. When attempting something foolish, like picking up an object you already have you meet, 'Far be it for me, a mere servant to criticise such an omnipotent one as you, but I've got that!' or, 'Although your last command was intellectually superior, I was unable to comply with it'.

You see what I mean it either drives you potty or you secretly find it rather amusing.

It's not just the replies which get this treatment, how about this location description? 'I am standing on a vast mountain plateau with barely anything in sight worth mentioning except an old cigar butt (probably from the same not-so-litter conscious native as found elsewhere), and one tree (probably not the same one as mentioned in the Covenant Chronicles)'.

A lesser, but no less unusual feature of this game, is the sound, where typing a letter creates a noise not unlike that emanating when a pacman gobbles a pep-pill while ENTER finishes it off with one reminiscent of a pacman catching and munching a fleeing ghost. All part of the humour.

There is a bit of the cheap game syndrome about this one which was not so apparent in Sub Sunk which keeps itself to the very precise task of escaping from a sunk sub. The Helm has a small sleepy village adjacent to a barren desert and all the environs occupy just the one location. The overall impression is of an old fashioned game, the sort that was once play3d in order to gain experience of adventuring with the sure knowledge that better was soon to follow.

An old fashioned game, the sort that was once played in order to gain experience of adventuring with the sure knowledge that better was soon to follow.