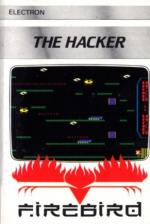 A lot of very odd companies have jumped head first into the computer games market. One of these, British Telecom, although an unlikely entrant in the home computer market, is one of the more successful "big business" competitors.

Their Silver range of games - budget-priced software in the mould of Mastertronic - is on a par with most commercially available software selling for around £10. And The Hacker, their latest Silver release, is no exception.

The Hacker is an arcade style game, in the same vein as Manic Miner and Program Power's Ghouls, and is sure to be welcomed by all BBC climbing fanatics. It features sixteen levels of fantastically varying screen arrangements which incorporate more than their fair share of obstacles and traps.

The first level proved just too difficult for this reviewer, unfortunately, but thanks to a system where you can jump to any screen I was able to play more than the first level. Strangely, I managed to complete the second and third levels but then all my efforts floundered on the latter screens.

True, the game is similar to Manic Miner. You do have to run along platforms, pick up and jump across gaping chasms, but the strategy and planning needed to complete each screen is greater.

It takes some time to realise what you have to do and then a great deal more time before you have perfected the technique for that particular level.

No doubt there are plenty of whizz kids around who will be able to complete this game in half an hour. But for most of us The Hacker should prove to be a challenging game with a long lasting appeal.

A challenging game with a long lasting appeal.