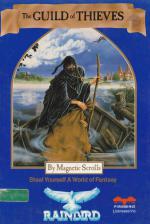 Guild is the latest offering from Magnetic Scrolls, which also brought you The Pawn. I have seen a prototype Commodore version and a finished Atari ST version and was very impressed - particularly by the pictures. Full judgement about the game itself must await the release of the authentic Amstrad version, but in the meantime here are some details to whet your appetites.

There's no doubt that Magnetic Scrolls has managed to come up with an excellent adventure-programming system. Its parser is the best I've seen and I would tend to think that it is now at least as good as Infocom's, if not (in some respects) better. It will certainly overtake the American competition in its revamped version (subsequently under development).

For example, you can put a key in a bottle and then pick up another container (a box, perhaps) and enter "Put the key in the bottle in the box". That, fellow wanderers, is quite snappy programming. Even better, it's got the whole system running in such a way as to make it quite friendly for adventure writers. Very useful...

It seemed to me that most of the attention received by The Pawn was because of its graphics first, its parser second, and its storyline third. That's a pity, because the game itself was full of wit and originality, though I don't think Magnetic Scrolls has quite the same mastery of atmosphere and invention that Infocom manages to get out of its authors. Guild looks at least as strong as The Pawn in content and style, and better in presentation and parsing.

The basic idea behind this new adventure is that you must become a member of the infamous Guild Of Thieves by successfully carrying out a series of dastardly crimes. The game comes in the usual sumptuous Rainbird packaging, complete with Bank of Kerovnia bankers card, Guild Of Thieves application for membership, and a copy of the latest issue of What Burglar magazine. The latter looks great, although it isn't quite as witty and original in content as the inspired title suggests. It does, however, include a whole set of encrypted clues to the game (as did The Pawn's documentation) an excellent habit which I wish other companies would also adopt.

To what extent The Guild Of Thieves lives up the reputation set by The Pawn must remain debatable until I have a chance to play the Amstrad version. From what I've seen so far, however, I reckon that it's likely to be number-one on many adventurers' shopping lists.

The Guild Of Thieves (Rainbird/Magnetic Scrolls)