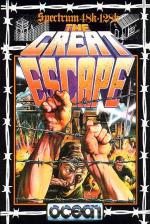 After dismal offerings such as Miami Vice and the truly awful Knight Rider, Ocean need to escape from this rut. Will the path to freedom lie in The Great Escape?

Set in 1942, you are the prisoner in an old castle converted into a POW camp. Although the Kommandant assures you that "for you, ze war is over", you're determined to escape and get back in time for the second half. Until then your daily routine consists of roll calls, meals, sleep and exercise periods.

If you leave the game for more than a few seconds then your prisoner will automatically follow this routine and will use any free time to practise pacing up and down. This may sound pointless but is essential if you are going to escape.

Watching this automatic prisoner going about his daily routine reveals the times and places where you must be so as not to raise the alarm. It also reveals the times when you can roam almost undetected and the position and habits of the guards. Once you've plotted the camp routine then you can think about getting out.

As your confidence grows, you can duck through doors while guards are facing the other way, search an off limits room and return undetected in time for the roll call.

The attention to detail is incredible as 255 scrolling screens represent the camp and its buildings and perimeter that are packed with prisoners, goose-stepping guards, guard dogs and, of course, the Kommandant.

The rest of the screen display shows your score, any objects that you are holding, messages such as those announcing roll call, the camp's alarm bell and a flag representing your morale. If this is at the top of the flag pole then you're fit and can gain control of your character by simply pressing the fire button, but if it's low then your will is broken and you won't be able to break out of the camp's daily routine.

At the beginning of the game, security is quite slack and will remain that way until you're caught in the wrong place at the wrong time. As escape attempts fail and useful objects are found and confiscated the security will tighten.

This has a bad effect on your morale as does a constant German escort until finally the game ends as your morale hits zero.

The other prisoners have already reached this dismal state and will be of little use to you although a few retain some life and can be bribed into creating the odd diversion. But for the most time, you're on your own.

At the beginning of the game things look hopeless and you begin to wonder how you'll ever escape. Then you'll find an object or perhaps accidentally move the boiler in your room and discover a tunnel and suddenly you're be on the trail. Your morale will increase and soon you'll become a one-man escape committee.

Unfortunately, you can only carry two objects at any one time, so you'll have to find a safe place to stash them away from prying Germans until you need them for your next escape attempt.

Some games you seem to spend more time in solitary than in the camp but somehow being caught at the last minute just makes you even more determined to escape next time.

An excellent game that features superb graphics and animation that really captures the atmosphere of the Great Escape.

An excellent game that features superb graphics and animation that really captures the atmosphere of the Great Escape.