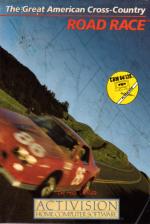 Why, I wonder, are nearly all road race games set in America? Driving across the Sahara or over the Andes would be much more exciting than this predictable slog from the Pacific to the Atlantic coast of the USA. The instructions appear to be dauntingly long, until you realise that they are in four different languages and cover three different versions of the game.

Once you have identified the relevant sections, there isn't that much to wade through. They describe how to choose one of the four possible routes and select your next destination city, and how to drive the car. Driving is surprisingly easy once you have mastered the art of gear changing, as the great American highways are quite straight and carry very little traffic. The most awkward part is filling up with gas, as the gas stations are few and far between. If you run out, or blow the engine by mistiming your gear changes, you have to "push" the car to the next gas station by repeatedly pressing the joystick button. This takes so long that you will almost certainly run out of time and be disqualified.

You are told your position in the race at the end of each stage, and there is a hi-score table in which you can enter your name if you finish in the top 10. A few more potential disasters might have redeemed this game, but as it is it's marginally less exciting than a long drive up the MI.

A few more potential disasters might have redeemed this game, but as it is it's marginally less exciting than a long drive up the M1.