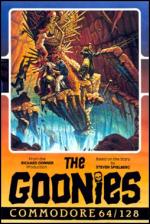 Yet another game-of-the-film hits the market with the release of US Gold's Goonies. Not much is known about the new Steven Spielberg film since it hasn't yet been released over here, but the game gives a little clue to its storyline (that's if the game does follow its storyline) of a group of children on a treasure trove adventure.

The idea of the game is to get through the eight different screens and collect the chest of gold from the pirate ship on the final screen. Each screen has its own problems which have to be negotiated before the player can progress to the next one.

Playing The Goonies is a pretty novel experience, since two characters have to be used in tandem to complete a screen. It's not as complicated as it sounds and playing with this control method isn't at all hard.

The screens are all platform variants and the whole game plays rather like Bruce Lee -- your character can run and jump everywhere.

When you start you see your two characters somewhere on the screen. Toggling the joystick results in one of the characters moving. If you press the fire button, then control is switched to the other character. To solve a screen, both characters have to complete a task, for example on the first screen one character has to start a machine then the other has to knock over a tub of water. Once that has happened, then both characters can dodge round the meany which patrols the bottom of the screen. Using two characters like this is really fun and is a control method which should be expanded upon.

All the screens have to be completed in similar fashion, and as you progress through the eight screens the puzzles get trickier and require quite a bit working out. When you finally get the treasure then you are transported back to screen one and have to start again, with the same objectives.

I am always very sceptical, in fact cynical, about games based on or around films and TV programmes. The reason being that most of those released so far have been weak in gameplay and seem to rely heavily on the title to sell. I've always thought Ghostbusters was such a case, but perhaps that's me being overly cynical. Goonies however, doesn't appear to follow the film too closely (although I have yet to see it), but is a good game with many original features -- despite being a platform derivative. Graphically it is poor -- sprites and backdrops are crude in their definition and there is a distinct lack of colour, with only four used! The sound is just as bad -- the tunes must have been written by a sadist in the field! My main gripe is that while the 8 screens are inventive and challenging in their own right, they do become somewhat repetitive to play and some further action would have been welcomed and appreciated. A good variation on the platform theme.

I find it very hard to play a game of a film I haven't yet seen. The whole plot escaped me and I suspect a lot of the game's appeal did as well. What was left was an eight screen platform game with a few new features. The control method was quite good; I can see how a two-player game could be great fun. Graphically Goonies was extremely poor, looking very similar to other Datasoft releases. Looking upon the packaging I saw someone was actually credited for designing the graphics. Well whoever did design them is more than likely to still be in nursery school and must be working for Datasoft part time. The game itself was quite reasonable, though some gamesters may well find eight screens a bit limiting. Maybe worth a look if you're a platform games freak.

This is quite a good little game, marred by the fact that it only has eight screens and those have awful graphics. The problems posed on each screen are nicety thought out and pretty ingenious. The only problem is that once you've gone through them (which isn't too difficult) there is a tendency not to return to the game. The sound isn't too bad and the tunes get a little grating at times, but the graphics are a real disappointment. They're very reminiscent of those on Conan, very crude with awful colours, it's a shame that the game hasn't been exploited to its full potential; as it stands it seems only part finished.

Presentation 68%
Rather dull compared with most US offerings.

Graphics 42%
Crude in appearance and certainly lacking in colour, but good standard of animation.

Lastability 64%
But there's only eight screens.

Value For Money 62%
Average game at an average price.

Overall 67%
Fun, but we hope the movie's better.

An average game at an average price. It's crude in appearance and certainly lacking in colour, but has a good standard of animation.