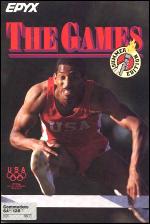 Hope you've been drinking your Lucozade, guys, 'cos if you want to enter this competition you really have to be fit. And I don't mean doing a one-legged jog round the TV every Saturday night when Blind Date isn't on either. When I say fit, I mean ultra, mega, massive-muscle, super-body-builder fit. And even if you're that... er... fit, you probably won't be fit enough to win all the eight contests (archery, velodrome cycling, diving, hammer throw, hurdles, pole vault, gymnastics rings and asymetric bars) your hopeful (and ravin' mad) nation has decided to enter you for.

As you arrive, you size up the competition. There might be up to eight human opponents settling in to the village, or just one mega-mean computer one. Depending on the state of your muscle you can opt to go into practice or throw all steroids to the winds and go straight for the events.

Suppose you fall foul of the local stomach bug, what do you do then? Well, you could always cut your losses and just go for one or two sports. With all the muscle you've accumulated, you surely must be capable of that.

I remember the good old days. You could buy a brown sauce sandwich plus chips and a mug of tea and *still* get change from a fiver, you could get a Mars bar for about 19p (ho ho) and any Epyx game that arrived hot off the press was bound to be good.

The Games series used to be among the best you could get for your Commodore 64, but with Winter Edition they really started to go downhill (and I don't mean on skis).

If anything Summer Edition is even worse than that. Some of the graphics (especially the hurdles) suffer from a bad attack of the blobs, and hardly any of the events require that much skill.

Unless you're the sort of masochist who enjoys wasting loadsa money (and we don't want the likes of you pervies in this magazine anyway), forget this and stick to the original Summer Games.

Down at Epyx (or is it across at Epyx? - my geography was never very good), they must really be getting desperate trying to think of more sports to simulate.

Trouble is, there doesn't seem to be all that much left which really lends itself to the sort of treatment that made the earlier Games series so good.

Half the sports (especially the asymetric bars) require so little player input that getting through the event is just like watching a demo - the other half is so complicated you can't be bothered to play.

If you're after a really new and original summer games sim, go for Tynesoft's Summer Olympiad instead.

Sound 67%
Medley of tuneful and slightly less tuneful melodies. Nothing that really grabs you by the earlobe though.

Hookability 65%
There's enough curiosity value to take you through each of the events at least once...

Lastability 44%
...but in the end, there's just not enough challenge to keep you playing.

Overall 49%
A disappointing release from one of the most successful originators of the strategic "games" sim.

A disappointing release from one of the most successful originators of the strategic 'games' sim.