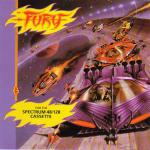 I was a little surprised when I first loaded this one up. No small, fluffy animals to be seen. And the packaging looked a bit inappropriate as well. I concentrated for a while, and then it clicked... 'Furry' is spelt with a double R.

What with the multitude of mostly-identical racing games currently available, wouldn't it be nice if someone took the old format by the ear and gave it a good tweaking? Well, by jingo, that's exactly what Martech has done! In The Fury, not only do you have to beat your opponents to the finish line, you've got to beat the lard out of 'em as well? This is what the punters have been crying out for.

In case you weren't aware, and I certainly wasn't until now, by the year 2045 the hip thing to do at the weekends will be Rim Racing. What this involves is driving your liquid-nitrogen powered car around the Rim, which is part of an artificial planet called Devs, which in turn orbits Jupiter. (Cynical cough!) This form of sport is going to receive blanket coverage in the media, possibly becoming even more popular than Gardener's Question Time, mainly due to a weird phenomenon called 'The Fury', which pops up and whisks people away mysteriously in the middle of the race.

Of course, simply whizzing round a track could get a little tedious after a while, so drivers are given the option of fitting weapons to their vehicles. By this stage you'll probably have noticed the slower cars that trog around the track, are piloted by the learner-drivers, known as Noids (or Nerds if you-live outside New York). Line up behind one, blip the fire-button to activate your cannon/flame-thrower/missile and Fatoom! No more Noid - but loadsa Galactic Groats for your Junior Savers Account.

Ah yes, the money (listen good, 'cos this is the Strategic Bit). Having acquired a good supply of the folding stuff, by winning races and blowing people up, you'll then be able to nip down to the shops and spend it. A new car might be nice, if you can't be bothered to get the old one fixed. Oh, and some petrol (sorry - liquid nitrogen) to go in it. And what about a machine gun? Or an escape pod for the hairier moments? Needless to say, the more dosh in yer posh, the flashier the car you'll end up with.

You probably won't know it, though, as judging by the weedy little sprites everyone's driving round in a Skoda or something. I might even go so far as to say that some of them bear a startling resemblance to the Reliant Robin! (A joke: What do you call a Reliant Robin with twin exhausts? A wheelbarrow!)

Luckily, graphics are of little importance in this case. What matters is how it plays. And eeerm, it's not too bad, actually. The opposing cars move a bit randomly, and it can be frustratingly tricky to get through the first few levels, but after getting over the hurdle of the first three races or so, the game really opens out and becomes quite enjoyable.

As in the best games, practice makes perfect, and you'll need more than just a fast joystick-wibbling hand to make progress. A good dollop of patience would also help, as my Speccy came perilously close to being hurled through the window on a number of occasions. If you think you're up to it (fnar), The Fury is well worth the outlay.

Oh yeah, and if anybody EVER calls me 'Jon-Boy' again...

A nice blend of arcade and strategy, shaken not stirred.

A nice blend of arcade and strategy, shaken not stirred.