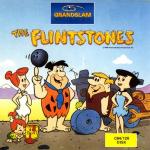 Fred Flintstone is not a happy man. This is the weekend on which the final of the Bedrock Superbowl contest is being held. It's also the weekend that his mother-in-law is coming to stay, so Wilma insists that he paints the living room. Fred's only hope is to paint the room as quickly as possible, before the bowling alley closes.

So, armed with paint brush (which, incidentally, is a squirrel) and paint-pot he sets about his task. To confuse an already complicated situation, Fred is also babysitting his daughter Pebbles. She has an annoying habit of leaping out of her playpen and scribbling on the walls, usually on a patch that poor old Fred has just painted. The only course of action open to him is to grab his daughter and put her back in the pen, although this means that he drops the squirrel, which begins merrily bounding around the room. Squirrel recaptured, Fred can return to painting - until Pebbles escapes again. A time limit slowly ticks away. If the wall is not painted in time, Fred loses one of his four lives.

With the living room redecorated, it's into the car and off to the bowling alley. As this is the Stone Age, road surfaces are pretty dire (they haven't improved much since) and the road is covered with rocks. If Fred is driving like the proverbial bat out of hell and hits a bump, one of the wheels hurtles gracefully into the distance. If a replacement isn't found pretty quickly, the bowling alley closes and Fred loses another life.

At the bowling alley, the serious business can begin. Spin and speed can be set prior to launching the bowling-bail, as can Fred's starting position. The player gets two throws per turn (frame), unless he is a right lucky swine and gets a strike. Ten frames make a game and three games make a match. There is no time limit, so if Fred loses the match, he can still move onto the final section.

On returning home, Fred discovers that Pebbles is missing, so he rushes to the rescue and finds her at the top of some scaffolding. If the time runs out whilst Fred is clambering around, another life is lost. When all his lives are used up, Barney rescues Pebbles and Fred is branded a failure. Ah well, that's life.

The first Flintstones game, Yabba Dabba Doo by Quicksilva, had cartoon-like graphics similar to their TV equivalents, but suffered from tricky and uninteresting gameplay. The Flintstones, Grandslam's attempt at the licence, is a marginally more enjoyable game but has much less impressive graphics.

Poor sprites and feeble backgrounds coupled with a grating rendition of The Flintstones theme tune create a bad impression, and frustrating controls in the painting section do not enthrall. The sub-games are dated - a paint and collect game in 1988?! - and the basic Tenth Frame bowling doesn't encourage the player to reach the final section.

TV licences work rarely, if at all; The Flintstones certainly doesn't.

Yabba Dabba Doo, it's the computer version of that Stone Age cartoon show, The Flintstones. All the regulars are here: Barney, his wife Wilma, Betty, and of course the long suffering hero himself, Fred Flintatone. It strikes me that the programmer hasn't done his homework very well, as neither of the chunky heroes looks much like their TV personae.

The sound is good with a decent rendition of the theme tune, although this can be switched off if desired. The gameplay is a little difficult at first, due mainly to the slightly unresponsive control. But perseverance does reap some reward, though I personally found the game to be too difficult to warrant extensive play. Take a look and see what you think.

Graphics 41%
Blocky but quite colourful.

Lastability 46%
The two different parts are as unappealing as each other.

Overall 40%
A poor interpretation of the cartoon, only recommended for die-hard fans.

Perseverance does reap some reward, though I personally found the game to be too difficult to warrant extensive play... TV licences work rarely, if at all; The Flintstones certainly doesn't.