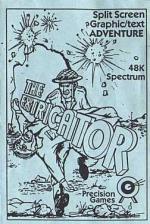 I suppose you might call this another QUIP adventure - one written using The Quill, The Illustrator and The Patch. And come to think of it, that's not altogether a bad description for a game that displays a neat line in dry humour. In One location there's a piece of string which you can't GET, so naturally you EXAMINE STRING: "You know perfectly well what a piece of string looks like." Oh well, it was worth a try. Elsewhere you rummage through a pile of rubbish to unearth a letter. We intrepid adventurers are always finding letters, and what's the first thing we do? Right, READ LETTER. "It's not that sort of letter!" What? Examining the object proves that in fact it's a letter 'L' that's dropped off a sign somewhere - though what the 'L' you do with it I haven't yet worked out.

Your task in The Extricator as an earth agent for a top security company is to rescue a Professor Roberts from the detention area of the 'Star Fleet Command' headquarters on the Planet Arg. You begin, though, on "an alien plain with purple grass swaying in the breeze" You're wearing a tin hat and staring at a rather tatty scarecrow. Sitting staring at things doesn't normally get you very far in adventures, though this is one where you'll have to look closely at the occasional illustrations, as well as paying attention to the text, if you're to make any progress.

Uncovering a familiar old fissure, I made my way past some not very clean water and into one sector of the complex. On a desk I found a computer, which on closer inspection turned out to be "a ZX Spectrum wearing a Saga keyboard." I had a tape of data with me with a laser gun, and eventually I made it to the red sector.

I doubt if experienced adventurers would take too long to work their way through this, but I think you'd still like some of the problems and smile at their solutions. Beginners though, could find it taxes their ingenuity a good deal. The atmosphere's reasonably convincing, with an attempt to produce more than just the bare location descriptions. And the pricing's about right to provide value for money, especially as the B-side of the cassette contains an impressive tune called Frantic.

The atmosphere's reasonably convincing, with an attempt to produce more than just the bare location descriptions.