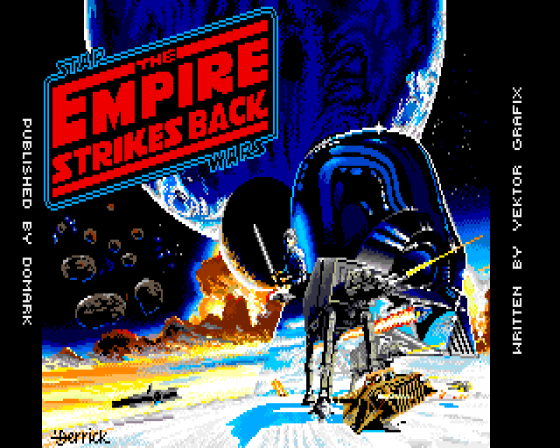 Back in the old days, if you wanted to be like Luke Skywalker, you have to grow your hair long, spend hours perfecting a wide-eyed goofy grin and use a broom handle for a light sabre. Imaginative? Maybe. Cool? Absolutely not.

Just when your reputation was really at an all-time low, the conversion of Star Wars appeared. Coping with that was a sinch. Question is, can you still cope when The Empire Strikes Back?

Your main objective sounds dead simple: reach the protective safety of huge asteroid. Trouble is, you only have five shields and you've to survive four levels of danger first. Get hold of your nearest snowspeeder because first of all you play the part of Luke. Probots are trying to transmit pictures of the Rebels' power generator to Darth Vader and you've got to try to shoot them first. 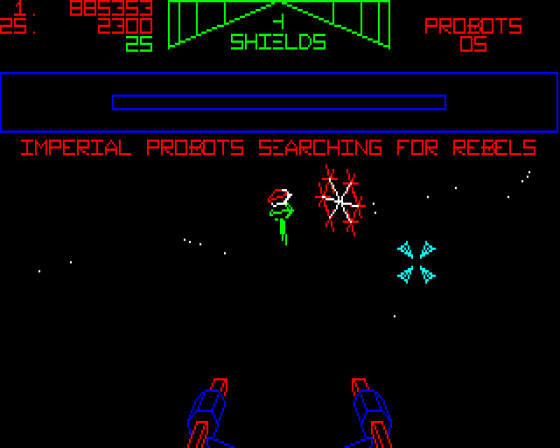 Immediately, you're face-to-face with small AT-ST and huge AT-AT walkers: you've got a limited number of tow cables to fire before you make it to the rebel base. Next, look cool, because Han Solo's in the hot-seat next. The Millenium Falcon is under attack from Imperial TIE fighters - if he manages to blast them out of the way all Han has to cope with is the asteroid field. Easier said than done: every collision involves the loss of one whole shield.

Hit a certain number of targets on each level and you're awarded a JEDI letter. Collect all four, and you attain true Jedi Force, a power which makes you invincible against all Dark Side enemies for a limited amount of time.

So, put that in your pipe and smoke it, Darth. 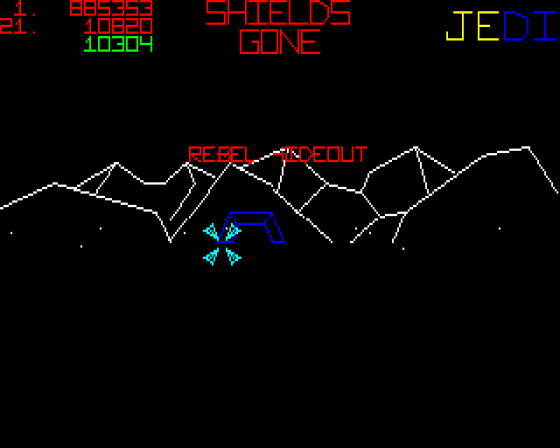 Hurrah! One of my favourite arcade machines (not that you see them much nowadays) converted to the Amiga. It's not quite as good as the original - the vector graphics are just a tad too slow for that - but who cares when you can zoom through the sky shouting out "Death to the Empire" and "Kill Darth Vader" at the top of your voice... er... preferably, when there's no-one else in the room.

Being able to use the mouse is a definite improvement over messing about with a sluggish joystick, and really recreates the atmosphere of the arcades. The only real disappointment is the sound - surely the Amiga could have provided us with a bit more than a Chewbacca roar and one or two sampled squirts?

Still, I'd rather play this than any other Empire conversion I've seen. In fact, I think I'll have another go... 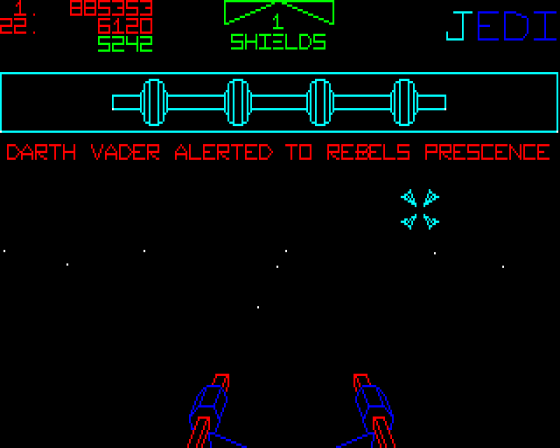 Domark did a pretty good job with the Amiga conversion of Star Wars and they've done it again with The Empire Strikes Back.

The careful presentation manages to recapture a lot of the frenetic atmosphere of the arcades, and as you've got the option of using the mouse (which I'd definitely recommend), you don't have to worry about controls and can just get on with doing what comes naturally - i.e. shooting mindlessly at everything in sight - great!

It's a pity that following the unexceptional quality of the sound in Star Wars, Domark haven't thought to improve it a bit the second time around. OK, so it's true to the original but the arcade version was released some time ago. 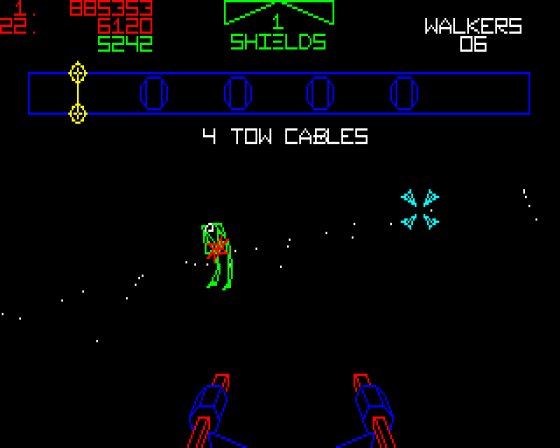 A more up-to-date soundtrack and the Amiga conversion really would have been something to shout about.

Presentation 81%
In-game instructions, difficulty levels and bonus sequences - if you had to put 10p in the Amiga, you'd almost be playing the coin-op.

Graphics 53%
Faithful to the slightly outdated original though just a touch too slow when the screen gets crowded.

Hookability 84%
You've just got to see whether you can complete all four stages in one go...

Lastability 79%
...and whether you can do it again, with more points or fancier flying.

Overall 82%
An excellent conversion - atmospheric, addictive and faithful to the coin-op.

An excellent conversion - atmospheric, addictive and faithful to the coin-op. 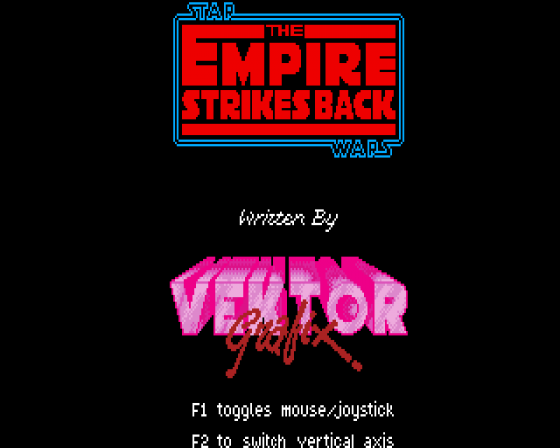 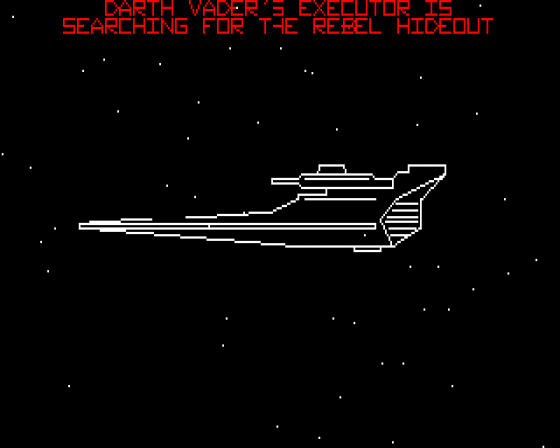 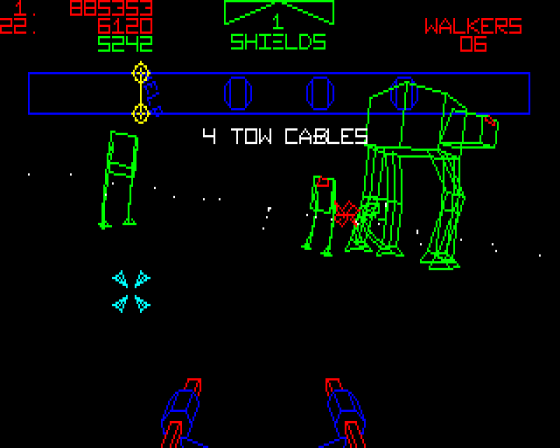 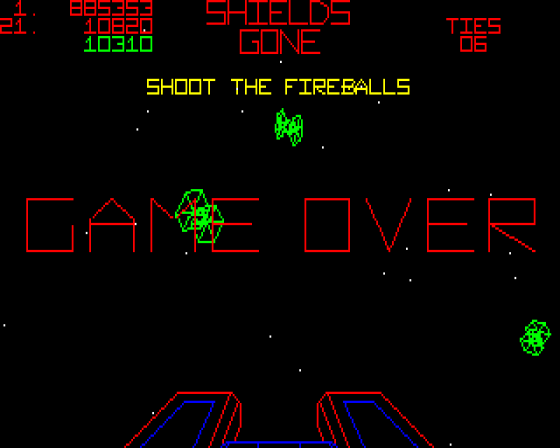 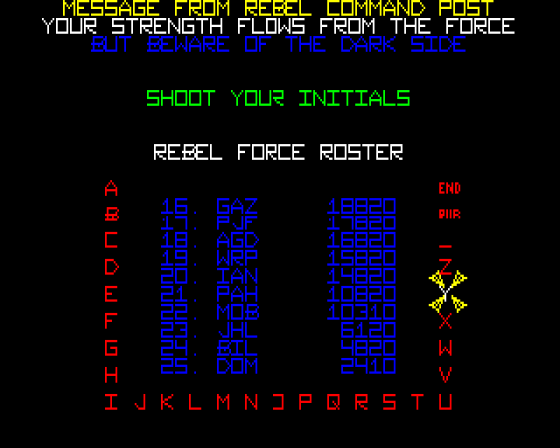