﻿ The Empire Strikes Back (Domark) Review | The Micro User - Everygamegoing

Published in The Micro User 6.10 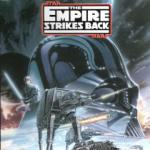 Last March I reviewed the BBC Micro version of the Atari arcade hit Star Wars in which the Empire received a real pummelling from the rebel pilots. Now comes The Empire Strikes Back in which an extremely miffed Darth Vader launches a concerted attack against the rebel forces.

Before beginning the game you are given the opportunity to re-define the control keys - a useful and very welcome feature. Unfortunately, you are limited to using letters only - the ?, * and Return keys are not acceptable. Along with Z and X, these must be the most common preference for computer gamers.

The Empire Strikes Back uses the same multi-game format as its predecessor, with Probots, Walkers, Tie fighters and asteroids forming the four sections to be played. They all employ the same vector graphics used in the Star Wars program.

The Probots are tall, mechanical devices that scour the rebel planet in search of your secret base. Sat astride your snowspeeder, you dodge enemy laser bolts and return fire, destroying as many Probots as possible.

No matter how well you perform in this first section the Imperial forces still manage to get a fix on your base and section two begins. Lord Vader dispatches a whole battalion of Imperial Walkers to destroy the rebel power generator - these are of two types, the small but nimble AT-STs, and the huge lumbering AT-ATs.

The two-legged AT-STs fire at you, but can be destroyed with laser fire. The larger elephantine AT-ATs are practically invulnerable to your puny lasers, but will fall foul of a strategically fired tow cable. A direct hit causes the machine to sink to its knees before exploding - a very nice touch.

Section three is a repeat of the Tie-fighter attack that proved to be the high spot of the Star Wars game. Assuming the role of Han Solo, you pilot the Millennium Falcon in a fast and furious dogfight against a squadron of Imperial fighters. The auto-repeating fire button is very welcome as things begin to heat up.

Then comes the final section of the game: The asteroid field. No matter how many times I attempted to negotiate this one, I always fell foul of one asteroid too many. The huge angular shapes proved to be impervious to laser fire and practically impossible to dodge. Give us a chance, Domark.

You are given the option to start the game on any one of three difficulty levels, although they all seemed very similar to me.

The Empire Strikes Back is an all-action, zap and blast arcade game and even better than Star Wars.

The Empire Strikes Back is an all-action, zap and blast, arcade game and even better than Star Wars.