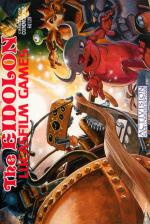 The latest game from Lucasfilm, The Eidolon takes advantage of the brilliant fractal-like graphics used in Fractulas and Koronis Rift.

To those amongst you who don't know what the title means, that included me until I looke it up, the word eidolon (pronounced i-do-lon) means "an image phantom" or idea, the word applies to any game really, and doesn't really suit the idea of this game, but who cares?

The game is based on the idea of tunnels underneath the earth, and of the treasures to be found in them, the idea is that you are in control of a machine which looks like something out of "Journey to the Centre of the Earth" and the analogy goes deeper than that.

Around you are tunnels and caves, inhabited by musical monsters, the meanest of which is a dragon. Your craft has a temperature gauge to tell you how close you are to the dragon. More on that later.

As you go through the game you pick up crystals, which "float" just below ceiling height, pick up too many, and you risk an overload. Too few, and you put your life at risk.

The idea is to go around, locate three special coloured crystals which you require to get on to the next level. However, you have to kill the various monsters protecting them with the ordinary crystals before you can get the coloured ones, and then once you have all three, confront the dragon, and blast him until he dies. This allows you to proceed on further into the game.

The graphics are really good. The caves look very realistic. The joystick response is good, and finding your way around will be tricky without a map. No doubt thousands will be published.

This game also suffers the same problems as Fractulas. It does get a bit tedious after a while. However, it is the best 3D maze game I have ever seen. The animation of the monsters is very good, and in particular the dragon is very menacing. For once, the game also sounds very realistic as well, your ears are confronted with a deep growl of a dragon who doesn't look very happy, rather than the usual laser zap.

A good game, but perhaps a little bit slow.

A good game, but perhaps a little bit slow.