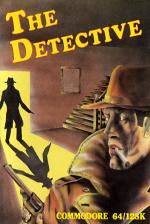 Deep in the English countryside lies MacFungus Mansion, an old stately home owned by the old and stately Angus MacFungus - at least, it used to be...

Finding an anonymous call on his answerphone saying 'MacFungus has kicked it...', Inspector Snide of the Yard suddenly finds himself with a murder case on his hands, and sets off to MacFungus Mansion to begin the task of discovering whodunnit.

Taking the role of Inspector Snide, your aim is to gather information and clues from around the house, solve the case and implicate the murderer.

Snide moves around the Mansion, which is displayed using 3D, Ultimate-style graphics, and is full of all the usual rooms, corridors and secret passages.

The house also boasts a strange collection of inhabitants, including the incoherently babbling Major, an absent-minded professor, a collection of servants and even a smattering of the clergy.

Whenever Snide is in the vicinity of an item of interest, the border flashes and on clicking the Fire button, a menu sheet appears, containing all the relevant options.

A large series of commands is available, including the ability to examine, manipulate and utilise objects. Any useful items discovered may be carried, but you are limited to six at a time - unless you can find something to carry them in.

You also have the option to interrogate the house members, questioning them about MacFungus, objects or other characters. This isn't a guarantee of a useful answer, however.

As the game progresses, you find more and more deaths occurring, carried out in a number of strange and macabre ways: strangulation, knifing and even squashing under a fallen piano. You have to collect the necessary evidence and accuse the murderer before you run out of time (and suspects!) - fortunately, the game has a pause mode allowing you time to ponder your next move...

Superb presentation is usually a very poor reason to buy a game. However, this may be one exception to that rule - I have rarely seen an arcade adventure which looks and feels as good as this one.

The characters develop distinct personalities, and the backgrounds and movement give a feeling of thrilling reality.

There are a few slight problems, the depth is questionable, and the pace is occasionally a little sluggish - but the humour and mystery involved serve to compensate a great deal for these minor faults.

I recommend this as a highly entertaining and beautifully polished piece of software - however, if it's an absorbing and long-lasting mystery you're after...

Now this is an entirely different approach to a whodunnit, combining elements of an Ultimate arcade adventure with those of a murder mystery, and resulting in an atmospheric and rewarding experience.

It takes a little while to get used to the awkward inertial cursor used to select icons, and it takes even longer to get to grips with what's going on and to find some useful clues - the instructions could have been bettter.

I was a little frustrated by this to start with, but the joy of finding a secret passage soon alleviated my depression. A fair bit of leisurely plodding around the mansion is required, so the pace is more often than not slow, and some of the responses and situations become predictable after a short while, but on the whole The Detective should provide more than adequate entertainment for the price.

At last! Argus Press Software have released something praiseworthy. The Detective is a smart little game with some neat animation and plenty of humour.

The action tends to be a bit on the slow side, but should keep most would-be detectives frowning for a couple of weeks - as long as they stick at it!

The instructions are rather sparse and some difficulty was encountered at first, the menu system being a little unwieldy to the uninitiated.

Not the best detection game ever, but certainly not the worst, and by far the best release from Argus Press in a long time.

Presentation 80% Very good, although the instructions and icon system could have been better.

Hookability 63% Exploring the mansion is easy enough, but it takes time to get to grips with the icons and general game structure.

Lastability 74% A tough case to crack, providing many hours of absorbing (although occasionally tedious) sleuth-work.

Value For Money 76% A good game at a fair price.

Overall 78% A novel approach to the whodunnit theme which remains entertaining even though more leg-work is required than brainwork.

A highly entertaining and beautifully polished piece of software... if it's an absorbing and long-lasting mystery you're after.