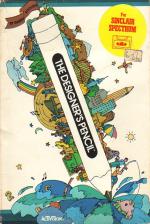 Finally, the first graphics designer with a musical flair has arrived. Activision's The Designer's Pencil not only displays drawing talent, but also delights with musical knowhow. If you're not careful, it will whistle all the time while it's being creative. If you're ready to create your first pop video show, read on....

The Designer 's Pencil contains a graphics and audio language subset which can be accessed entirely via cursor control either using the keyboard controls, Sinclair Interface 2, Kempston or cursor interface. Just point the cursor at the displayed command and press the action button. Just like an Ikon driven program without the Ikons....

The Programming Screen is divided into four main sections. Six small rectangles at the bottom of the screen represent the Master Commands which control the main activities. The scrolling instruction window displays the available graphics and audio instruction set ready for selection. The Prompt Window at the top left of the screen is the load and save work area. The rest of the screen is available for the current program listing.

If you've ever been in a supermarket, you'll find yourself at home with The Designer's Pencil. Just drive up with your cursor or shopping basket to the display shelf/instruction set and collect the desired item or items. The selected instructions are automatically listed in the programming area (no queueing at the pay counter!) and once the shopping list is complete, point the cursor to the RUN master command and the assembled program will run displaying your lack of drawing and musical talent.

There is no 'on live' design, in a manner similar to Logo the picture must be programmed indirectly and sequentially by creating a drawing file which can be subsequently run and checked.

On RUN the Draw Page is displayed and the file is executed with the picture developing as if by magic to the accompaniment of any programmed sound effects. The picture can be saved on completion or reviewed at any time during further editing. Lines can be inserted, deleted or modified.

DRAWING FACILITIES Most standard drawing functions are available: Clear Screen, Paper and Ink colour selection, Pencil on and off, Kaleidoscope on or off (mirroring in four quadrants), Circle, Fill, Text print, Drawing speed select and Arc drawing with a set radius. Extra to this comes the incredible range of musical commands which consist of NOTE followed by the pitch and octave.

Structured programming is also catered for with the help of labels, variables and an unconditional jump instruction. Subroutines are made possible with a jump to sub and a Return function. Program loops can be incorporated with a RECURSE A B command with variable B controlling the repeat cycle.

Variables may be set with fixed, random or with current coordinate values and simple conditional branches allow further structuring. For debugging purposes two functions may be of some use: DEBUG A displays the value of the selected variable and VIEW X/Y the current values of the coordinates during RUN.

The picture or the draw file may be saved on tape or microdrive under a given file name. The picture also can be printed on a Spectrum compatible printer (ZX printer, Alphacom 32 etc.).

LIKES AND DISLIKES The Designer's Pencil's use is very limited due to the lack of an immediate draw mode. Worst of all the cursor driven operation can drive anyone not only round the screen but also round the bend, as it simply takes hours moving the cursor up and down the instruction list or naming a file running up and down the alphabet. What looks like a good idea at first turns into a regular nightmare and anyone will wish for the good old-fashioned keyboard entry. The musical capability is very limited, but provides an extra dimension to the draw performance.

The Designer's Pencil is a curious piece of Programming, which should keep anyone intrigued for at least a couple of hours....

A curious piece of programming, which should keep anyone intrigued for at least a couple of hours.